Has your AT&T Galaxy Note 3 been having trouble finding and keeping a GPS signal? Then you're in good company, if the posts from aggravated users on AT&T's official support forums and XDA are any indication. One of these users contacted us to complain, and we can confirm that it's a problem with at least some AT&T Galaxy Note 3 units - one of the AP team member's personal phones demonstrates the same behavior.

This seems like pretty typical bad behavior from possibly faulty GPS radios. Most affected users are reporting simply unreliable performance with frequent cut-outs, often in the same physical locations. (The AP team member reports that his Note 3 will drop GPS where other phones do not, including an AT&T Galaxy S4.) at least one reported that GPS will die when the charger is plugged in or taken out, and another thinks the problems may start when switching between cell towers or HSPA/LTE. Others have had success with completely wiping their phones or disabling all non-standard apps that use location services, which could indicate a software problem rather than faulty hardware. 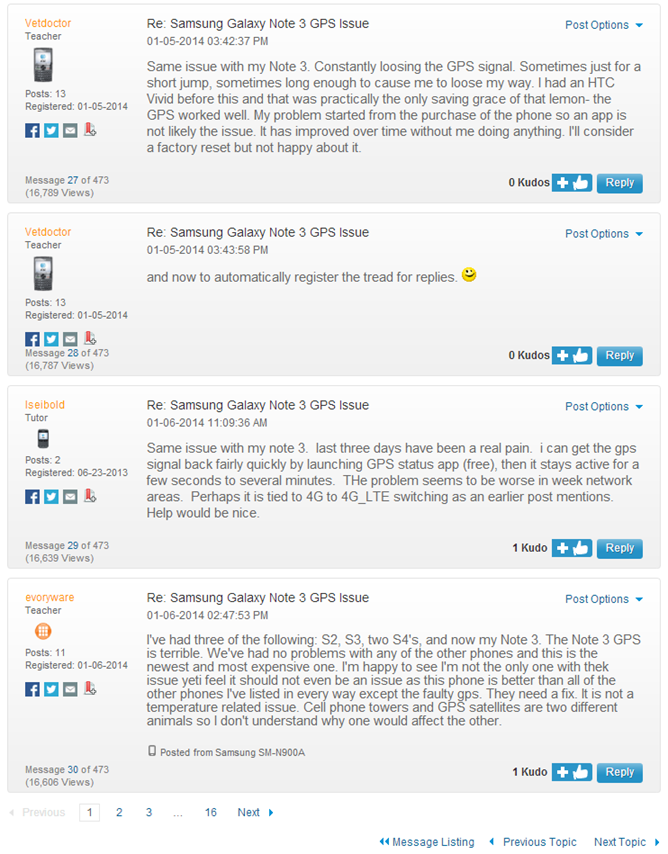 We haven't heard of these problems with the international version of the Galaxy Note 3 or other carrier variants. That could mean that the issues are unique to AT&T's hardware, or not - after all, a huge portion of the Note 3 units sold in the United States will be those specifically made for AT&T. A software update might be able to fix the problem, but users who have called in to AT&T say that their customer support isn't even aware of the issue. However, there is at least one reply from the official AT&T Twitter account that indicated someone is working on a solution.

@BaeckerX1 We've been working to identify a solution, Brandon. We'll release a software update soon w/ the fix. Thanks for your patience!

Right now the AT&T Note 3 is overdue for a KitKat update compared to some other carriers  - even Samsung's official page for the AT&T phone says it should be running 4.4 - but the OTA update doesn't appear to be live. We could be optimistic and say that perhaps AT&T and Samsung are trying to fix the problem before sending out the update. If you've been having problems getting a reliable GPS signal on your AT&T Galaxy Note 3 (or any other Note 3 variant), drop us a line in the comments. There's also a Change.org petition on the subject, for whatever good that will do.