More and more developers these days are using the Play Store to get beta versions of software into the hands of willing users. The system works well, so it's nice to report that another well-known app is taking advantage of it. Yelp now has an Android Beta Testers Google+ community that, if you join, will grant you access to the latest features before everyone else. 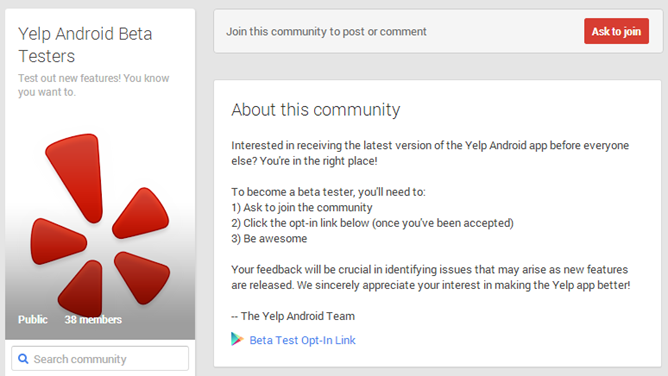 You may know the drill by now, as the screenshot above repeats the same steps most communities of this type require. Ask to join (don't worry, they will say yes), click the opt-in link, then download the latest version from the Play Store. You always have the option to opt-out later on, so there's little to lose by signing up.

Update: It's worth noting that there isn't currently a beta build to play around with, but joining the community means you will get it once it's ready.

Fascinating: Project Ara Team Member Gives Us The First Glimpse Of How The Product Will Work In ...