The term “old school” gets thrown around a lot in gaming these days, but Touch Foo’s Swordigo seems to positively invite comparison to classics like Ghosts & Goblins and Zelda. With 2D platforming on the surface and an action RPG underneath, Swordigo might be confused for a Super NES game if it weren’t for the 3D graphics. And while it doesn’t reach the lofty heights of the classic franchises it imitates, it’s a challenging and worthy game if you’re in for the long haul.

Swordigo comes to Android after more than a year on iOS, where it’s been getting 5-star reviews almost exclusively. After spending more than a little time with it myself, I think that’s a bit generous. Is this the timeless, must-play hardcore game that Android (and mobile gaming in general) desperately needs? No. But it certainly merits a playthrough for those who are tired of the short attention span and nonexistent difficulty found in most similar Android games.

Once Upon A Time In Hyrule

In Swordigo, you’re a young man who sets out on an epic quest to save the world from a remorseless evil that threatens to blah, blah, blah. Yeah, the story section of Swordigo leaves a lot to be desired: it’s your basic hero's journey, complete with a shadowy and nebulous foe, incremental skill and weapon upgrades, and a paint-by-numbers fantasy landscape. 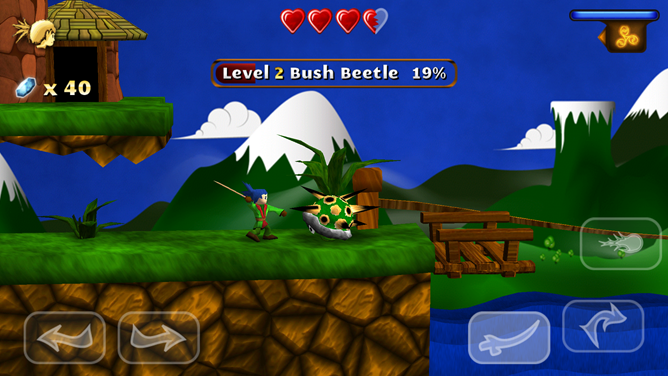 Not that you should expect much more than that: a simple game with simple gameplay (which isn’t a bad thing) doesn’t need an over-complicated story. It would have been nice to see that, and it’s not impossible, even for indie developers, but the fantasy window dressing should be enough to get you through. Swordigo plays like an old side-scrolling beat-em-up mixed with a traditional platformer. It’s too slow to compete with the likes of Mario and Sonic, and too simple in structure and gameplay to achieve the heights of Metroid or Metal Slug. More than anything, it reminds me of some of Capcom’s original Mega Man games: simple mechanics, big levels, basic attacks. The simplistic structure works to the game’s advantage most of the time, as it’s designed (exclusively) for touchscreens, and speedier action or complex controls would send the already considerable difficulty sky high.

What the game lacks in platforming chops it makes up for with RPG savvy. Your character levels up by slicing baddies with his sword or blasting them with magic, gaining attack, manna, or hit points with each level. A handy experience meter/HP meter shows up for every bad guy, letting you know which ones are worth the trouble and which to avoid. Some basic equipment and item combinations will give your attack or defense an extra oomph - the elemental “trinket” system is particularly well thought-out. There’s also a healthy puzzle and exploration element. You’ll need to scour just about every inch of the impressively large world if you want to reach the end of the game, and even after that, there are hidden goodies to help you afford the shiniest gear. An auto-save function, running tally journal, and spell switching round out the features.

At any given time you’ve got three options: run, jump, attack, or all three at once. Attacks come in simple sword slashes or magic blasts, sadly without combo opportunities or directional swipes. The lack of a directional component makes Swordigo more difficult than it needs to be: without any way to direct your attacks up, down, or diagonally Metroid-style, flying and jumping enemies become unreasonably difficult. The enemies themselves are surprisingly varied, with blocks, missile attacks, teleports, and all kinds of nasty goodies awaiting an inattentive adventurer, though their simplistic visual design makes them seem a little less menacing than they actually are. 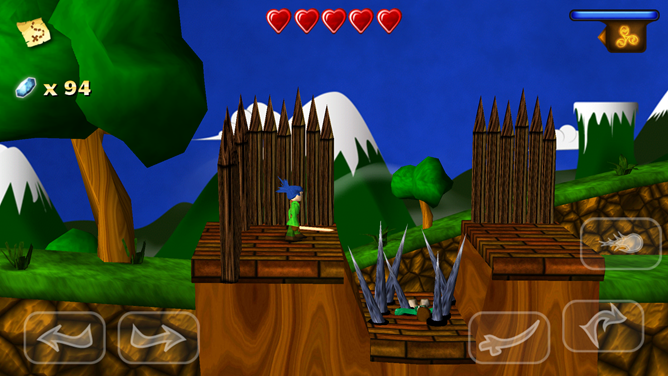 You'll need some decent twitch gaming skills to finish your quest. At any given moment you might be juggling moving platforms, a half-dozen small enemies, and a stage-spanning puzzle. Though there are only five control buttons, they can be user-configured to better suit your play style (or pudgy fingers). The game itself is also surprisingly long. Where other mobile games get length from in-app purchase inspired grinds or "three star" point goals, Swordigo is genuinely long, with a main story that will take you 3-8 hours depending on your skill level and dedication.

Easy On The Ears

From a visual standpoint Swordigo is at about the level of the original PlayStation, albeit with the smoother framerate and HD resolution that modern Android hardware can provide. It's a 2.5D game, with 3D graphics and completely 2D gameplay. The visuals themselves are just OK - not great, not terrible. They serve the gameplay and story well enough, but I can't help but feel that the game would have been improved by utilizing the sprite artwork of the titles it's imitating. I'm not saying that Touch Foo should have gone full "8-bit" style - there's entirely too much of that these days - but the ultra-simple character models and environments with their low-res textures aren't winning any beauty contests. On the other hand, you should be able to run the game on low-powered phones and tablets.

The music is another matter. While a lot of the sound effects and jingles sound like they're lifted right out of The Legend of Zelda, the background music itself is surprisingly awesome. It's synthesized of course, but it does a good job of setting the mood for an epic journey. The interface, too, is surprisingly good. It's easy to manage your small inventory and modify your weapons or spells, and though the economy in the game is exactly as basic as the old platformers, there's never anything you want to do that isn't obvious. A reliable auto-save and strategically placed portals make getting around much easier than they might otherwise be.

Fall On Your Sword

The poorest elements of Swordigo are ones that it shares with the old platformers it imitates: the extra difficulty comes from a somewhat clunky combat system and the unfortunate limitations of touchscreen controls. If the slash attack that is the bread and butter of the game were faster, and the magic ranged attacks were able to be directed up or down, it would be much less frustrating to get through the more crowded, twitchy sections of the levels. As stated previously, the lack of these mechanics makes flying and jumping enemies much harder than their low hit points merit. And speaking of hit points, the bosses (which are mostly just toughened variants of regular bad guys) vary from pushovers to insanely difficult on some occasions. 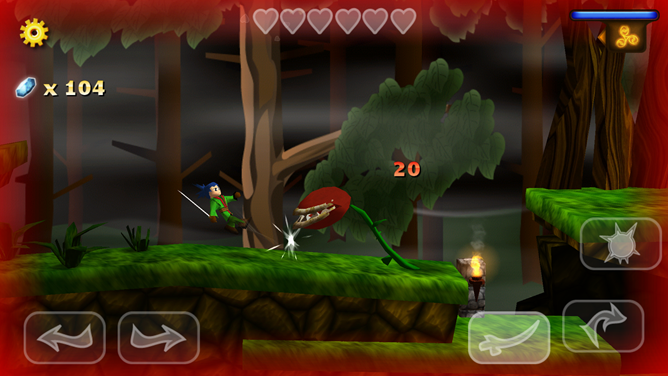 The only other real disappointment in the game is its physics engine. This most decidedly isn't a physics game, but you'll rely on precise jump distance and "swing" physics at crucial locations. Combine this with an ill-placed respawn gate or boss battle, and you've got a handful of choke points where Swordigo becomes an exercise in frustration. These drawbacks shouldn't sour you on the game - they're no more than even the best games have - but a few small changes in combat mechanics and level design could have gone a long way. 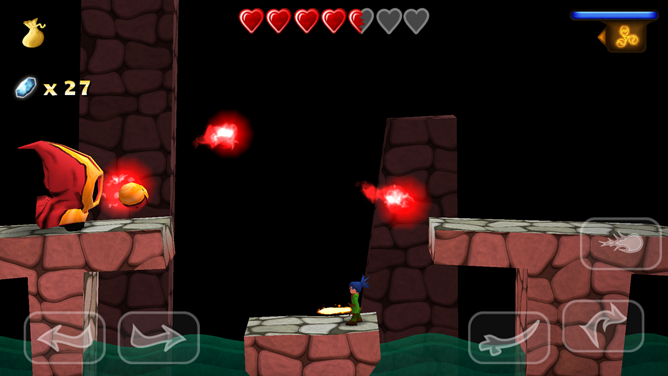 If you're looking for a hardcore RPG or a white-knuckle hack and slash combat game, Swordigo probably isn't for you. But it does achieve a happy medium, giving decent platforming challenges and that hard-to-define satisfaction that comes with role playing progression. Swordigo won't wow you in any one category, but it's a competent experience that's free of the grind and flash that's become so prominent lately. If you want a solid, lengthy adventure, give it a try. If you're tempted by the mix of RPG and platforming elements, you should also check out Reaper.