Let's start with the most visually striking aspect of the 2014 refresh: the rear cover. Instead of glossy plastic or gaudy faux leather, Samsung has gone for a "dimpled" look, not unlike the back of the original Nexus 7. And like the original N7, the dimples combine with the grippy coating on the plastic case to make the phone much easier to hold, which was a minor concern on previous generations. Aesthetically the change is sure to be divisive. I think it looks alright - not great, not terrible. At least the Galaxy S5 isn't trying to be something that it clearly is not, like the Galaxy Note 3.

You could be forgiven for thinking that the front of the phone looks nigh indistinguishable from the S4: Samsung doesn't want to mess with a good thing (or at least a reliable one) in that regard. The edges are a little more parallel, the home button is a little taller, and that's about it. The capacitive menu button has been replaced with a standard Android "Recents" button, though AOSP fans will still feel like it's on the wrong side. Long-press Recents and you activate the standard Android Settings button.

The screen itself is only .1 inches bigger than the one on the S4, a change I think Samsung felt it needed just for the sake of having it be technically larger. Though the resolution of the Super AMOLED panel is still 1080p, the brightness has been improved considerably, and the S5's software allows the screen to get much, much dimmer. At the low end of the brightness meter it's almost a completely dark screen under normal indoor lighting - this will be handy for reading in near-darkness and saving battery. Viewing angles are typically excellent, and it has the slightly over-vibrant look of most Samsung screens.

Here's something you won't hear in the official marketing for any new phone: the Galaxy S5 is taller, wider, thicker, and heavier than the previous generation. Granted, that still puts the thickness at a completely reasonable 8.1mm, and while the phone is about 10% heavier, I imagine users will appreciate the bigger battery and water-resistant build.

Yes, the Galaxy S5 is water-resistant, with an Ingress Protection rating of 67. That means that it should be safe from minor dust and a quick dunk or two in liquid. However, there are a few caveats: like the ruggedized Galaxy S4 Active, the S5 has a removable battery cover, using a rubber gasket and a groove to seal the more delicate areas of the phone away from harm. While that preserves the swappable battery and MicroSD card features that at least some users insist upon, it also means they'll have to be extra-careful to make sure that each one of the dozen or so plastic tabs that secure the cover is completely closed. If you forget one or two - all too easy to do considering the lightness of the cover - your phone will be exposed to possible water damage. This was a major issue with the S4 Active as well.

The bezel is a glossy, shiny plastic, which honestly looks pretty cheap... but then that's par for the course for Samsung. The power and volume buttons are in their expected places, though they've been slimmed down considerably. They're also much "sharper" than the S4's buttons, despite being made of plastic, which should make them relatively easy to find and press without looking. I imagine the change was made to match the home button, though the matte plastic there is almost certainly designed to enable the integrated fingerprint reader. We'll cover that in another article.

The USB 3.0 port is double-chambered like the Note 3, but still backwards with older cables. It's covered by a plastic tab for water protection, and that thing is a real pain to open. Just finding the millimeter-wide opening to pull out the tab is a chore, and if you have short fingernails, you might find it especially hard to access. I predict a lot of frustrated users will tear that thing right off and risk water damage rather than deal with it every time they want to top off their phone.

'Round the back you see the 16 megapixel camera in the same spot, still raised and slightly more square. Below it the cover cutout for the LED is a rounded rectangle, one side of which houses an infrared sensor that works as a pulse oximeter, a basic heart rate monitor. This is an undeniably cool inclusion on the phone, and one that will certainly please those who are interested in fitness. Some might think it's a superfluous addition considering that all three new Galaxy Gear devices use the same features, but for someone who wants an easy tool for a very basic health monitor, it's a useful feature add.

Pop off the rear cover and you'll see the speaker, the battery, and a combined module for the SIM and MicroSD card slots. This is a novel design, but since the MicroSD slot is directly on top of the SIM, you won't have to remove the latter every time you want to swap out a memory card. Unfortunately you'll still have to remove the strangely tall battery. Also note: Samsung has switched to the teeny tiny NanoSIM standard.

One of the features that doesn't get mentioned often but which makes a real difference in everyday usability is a phone's speaker. Samsung hasn't risen to HTC's challenge in that department: the S5's speaker is the same small, single version we've seen on other models. It's plenty loud; you'll be able to hear it from the other side of a reasonably quiet room without difficulty. That said, it's noticeably less clear than the speaker on the S4 - I wouldn't be surprised if the speaker is identical to the one on the Galaxy S4 Active, which uses an extra membrane for water protection. The external speaker grille is a single raised plastic bar, which also forms an awkward loop for charms or straps.

Actually holding the Galaxy S5 is comfortable, much more so than before (to be fair, I prefer a little heft to my devices). The redesigned rear cover makes it feel a lot more secure in your hand, and the slight extra space makes it slightly less likely that you'll hit the side of the screen with those thin bezels. On the other hand, the embiggened screen won't make it any easier to reach the top or bottom with a single thumb, which is a real problem while Android is still so dependent on notifications.

Judging the internal hardware will require an extended review, but it's a pretty typical bump over the previous year. The standard model uses a Qualcomm Snapdragon 801 processor, matching other flagships like the Xperia Z2. The Qualcomm phone will be the wide international version, though we expect to see variants of the Galaxy S5 powered by Samsung's own Exynos processor eventually (and primarily in Korea). RAM is 2GB, which is adequate, but a strange step down from the Galaxy Note 3's more generous 3GB. More memory would have been welcome, especially since Samsung's TouchWiz UI isn't getting any slimmer.

The internal storage is the depressingly standard 16GB/32GB, and I'm sure many regions and carriers will have to make do with the lower choice alone. Make use of those SD cards, folks - the Samsung software load on our preview device ate up more than half of the 16GB model's on-board storage. More subtle hardware additions, like LTE Category 4 and MIMO WiFi, will depend on your location and local hardware. Software is Android 4.4.2, though you'd hardly be able to tell. We'll dive deeper into the user interface and various other software features with other posts from Mobile World Congress. 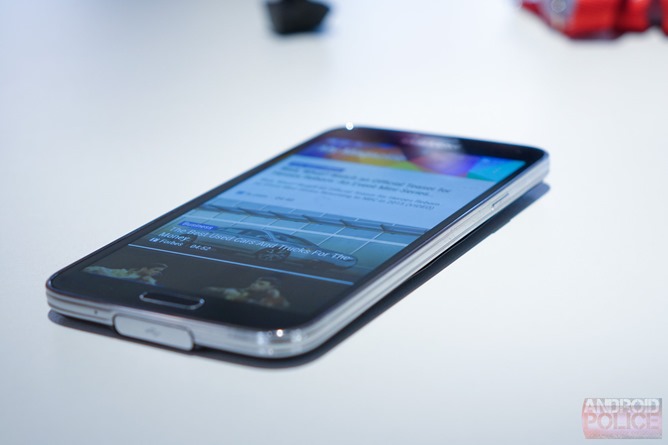 At launch Samsung is offering the Galaxy S5 in black, white, blue, and copper/gold. I'm a fan of the blue and I can't stand the cheap look of the copper, but most people will probably go with either black or white. Other color options will surely become available in time. Pricing hasn't been revealed, but the S5 and the new Gear watches will be available worldwide on April 11th.