My love of devices with built-in kickstands is well-documented. So it's no surprise that Lenovo's Yoga Tablet line, which is more or less built around the kickstand (or at least a big, rounded, multi-purpose hump that holds the kickstand and several other neat things) would catch my attention. The first versions were brought down by sub-par hardware, but Lenovo is back with the Yoga Tablet 10 HD+, which addresses a lot of the issues with the original.

First and most importantly, the device gets a considerable specification boost. The screen is now a full 1920x1200 panel, which has become more or less a must have when you're selling a full 10-inch tablet. The internals are upgraded as well, with a Snapdragon 400 processor clocked up to 1.6Ghz and a full 2GB of RAM. You have a choice of 16GB or 32GB, plus a MicroSD card and LTE. (The US probably won't get the LTE version.) The rear camera is 8MP, the front camera is 1.6MP, and the software is Jelly Bean 4.3 plus Lenovo's proprietary additions, though representatives said they were shooting for a KitKat upgrade just before or after release.

Let's talk about that hump. Like the previous Yoga tablets, the kickstand pulls out of the back housing smoothly, extending just shy of 90 degrees to offer either an upright video-friendly position or a lowered, slightly elevated position that's good for typing. It can also be set anywhere in between, and the thick aluminum of the housing is likely to stay where it's put. The kickstand is slightly bigger on the 10 HD+, making for a more stable standing position.

The hump is about half an inch thick, but don't think that extra internal housing is going to waste. The Yoga 10 HD+ has a massive 9,000mAh battery, which Lenovo says will last for eighteen hours on a charge. Even better, it uses the USB On The Go standard, so you can use that battery to top off your phone or the companion keyboard. The hump hides the tablet's MicroSD card slot and LTE slot so that they're inaccessible when the kickstand is folded up, and it gives room for two Dolby-certified speakers that face the front. The big curve also makes the tablet very comfortable to hold in portrait mode, much like the older Sony Xperia Tablet S. That's a good thing, because the aluminum build, kickstand, and battery make the tablet heavier than some of its contemporaries. 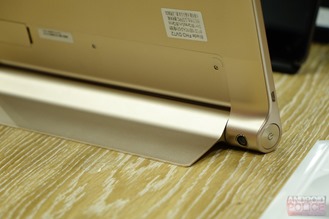 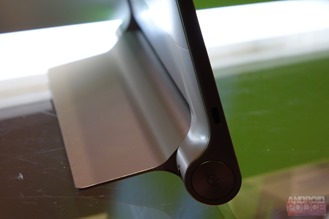 The rest of the design is pretty standard - nice, thanks to an aluminum body, but otherwise pretty basic. The software is an unfortunate downside: it was seriously struggling to keep up with Lenovo's custom launcher, especially in portrait mode. That might have something to do with the mid-range Snaprdragon 400 pushing so many pixels. There are a lot of business-oriented apps included, but nothing you couldn't find on the Play Store in a better form. The one exception is an interesting multitasking mode a la Samsung, but restricting it to Lenovo apps makes it much less appealing than it might otherwise be.

Lenovo is also going to release a first-party Bluetooth keyboard for the Yoga 10 HD+. As you might expect, it fits cleanly over the screen, doubling as a cover with a magnetic "smart" switch. The keyboard is surprisingly solid despite its size, and combined with the tablet's flexible kickstand it makes for a compelling input option. It will charge off of a standard MicroUSB port (and remember the tablet has USB On The Go for charging) and it'll be available as a $59.99 add-on - not bad at all. Combined, the tablet and the keyboard are a compact pair, and though there's no physical clasp the magnets should hold very firmly in your bag or backseat.

The Lenovo Yoga Tablet 10 HD+ is scheduled for release worldwide in late April. The standard 16GB WiFi model will start at $350 in silver and "champagne" gold. If Lenovo can work out some of the performance issues before release, it will definitely be worthy of consideration.