The phablet market is exploding, and just about every manufacturer wants a piece of the oversized pie. Here at Mobile World Congress ZTE has just announced the Grand Memo II LTE, the successor to last year's Grand Memo. It ups the screen size to a full 6 inches of IPS goodness. Well, maybe goodness  - they aren't saying what the resolution is just yet, just "HD," which I'll assume means 720p. 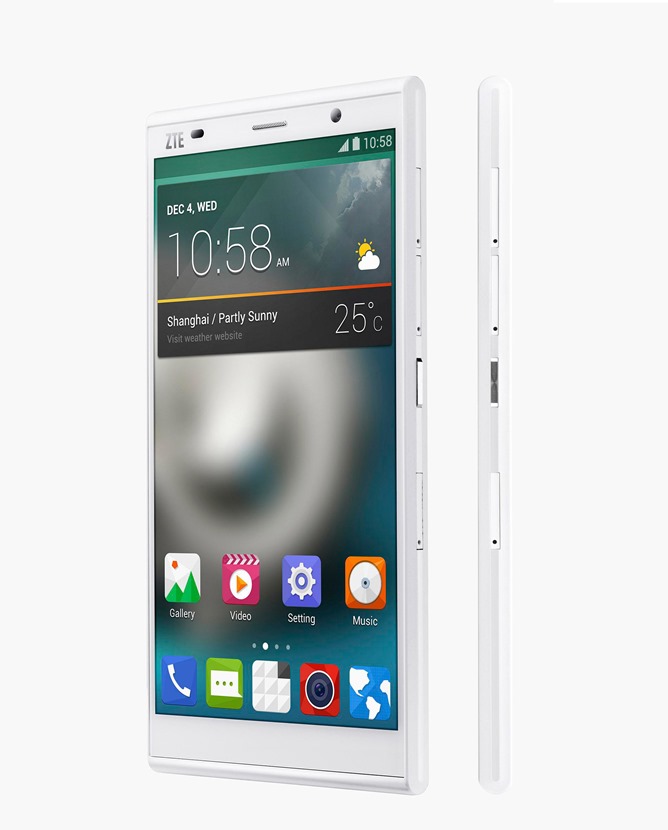 The phone itself is impressively thin, even accounting for the fact that larger phones have more surface area to cram all those guts in. At just 7.2mm, it's as thin as some of the phones aimed at fashionistas. That might be a lucrative segment for ZTE, because spec hounds won't be impressed. The phone uses a Snapdragon 400 processor, which is usually found on low end and midrange devices.

The rest of the hardware is generally good: 2GB of RAM, 13MP 2.2F rear camera and 5MP front-facing cam, 16GB of storage, 3200mAh battery (which should last even longer with a low-power processor), and Android 4.4 plus ZTE's custom user interface skin. The exterior design is pretty safe - it's a white slab with power and volume buttons on the side. There aren't any physical nav buttons, but neither are there virtual buttons, so it could be that capacitive keys are hiding below the white finish.

All in all, the Grand Memo II LTE looks like a big, big phone aimed at the middle of the market or just above. ZTE isn't ready to talk price, but it will launch in the manufacturer's home country of China in April, with a worldwide launch following shortly thereafter.

Mr Zeng Xuezhong, CEO of ZTE Mobile Devices and Executive Vice President of ZTE Corporation commented: “The Grand Memo II LTE is designed to meet the increasing user demand for stylish design with an intuitive user experience. High performance technology must be met with a simplistic user interface which allows users to customize their experience based on personal preferences.”

The new MiFavor 2.3 UI enriches the user experience, making the handset more natural for human use. By memorizing user habits, it offers users a simplified and tailored interface that can be customized to their needs using innovative intelligent split screens. Furthermore, the MiFavor UI brings elegant design features to the Google Android 4.4 KitKat operating system not seen on other devices including integration with functions such as notebook, calendar, weather forecast, alarm clock, Internet, and music.

With 4G as a standard feature, the Grand Memo II LTE can not only stream movies at top speed, but audio playback is also a pleasure with Smart PA and 3D Stereo Sound. And with ZTE’s focus on maximizing battery life, users will be able to enjoy all the entertainment they want as the 3200mAh battery, combined with ZTE’s unique battery-saving solutions that cut power consumption by 30%, allows for 16 hours of continuous HD video playback, 72 hours of music playback or several days of normal use.

With a Qualcomm® Snapdragon™ 400 processor, the Grand Memo II provides the required performance enabling consumers to take advantage of LTE and high speed mobile internet, online 3D gaming and HD video streaming as well as easily accessing social media channels such as Facebook and Twitter on the go. Furthermore, high quality pictures can be taken quickly and easily shared with the handset’s 13MP rear camera and 5MP front camera which is optimised for video calling.

The ZTE Grand Memo II LTE has been designed with quality in mind. At just 7.2mm thin, the handset boasts a 6” IPS display made from Corning Gorilla® Glass 3 that covers 80% of the front. A textured back adds a luxury feel as well as making the product feel tactile in people’s hands. HTC Begins Pushing KitKat OTA Software Update To HTC One Owners In The UK [Update: Other ...