The biggest change on display is the addition of a physical button on the "face" of the phone. Mirroring Samsung's near-universal phone and tablet design, it's a slightly rounded physical button (presumably without the flanking capacitive buttons). It also looks like the camera from the original Galaxy Gear has been moved up slightly - it's now just above the face instead of further down the watch band. The Gear 2 and Gear 2 Neo have very slight stylistic differences, especially in the screen frame and camera, but look pretty similar in a functional sense. Copper/gold and black color options are shown, but there will probably be multiple colors available at launch.

The UI itself is a bit different, with both models showing shortcut notifications on the home screen. Strangely the Gear 2 shows a camera icon and the Gear 2 Neo shows a notification icon in the first slot, despite both models clearly having cameras. Both use what look like general "activity" and "settings" icons in the second and third slots.

Assuming that the leaked names are correct, the Gear 2 Neo should be a lower-price option, presumably with lower specs and/or fewer features a la the Galaxy Note 3 Neo. The date in the photos, February 24th, means that a reveal at the Unpacked 5 event on Monday is all but certain. We're expecting the Galaxy S5 at the same Barcelona event.

Update: Here is the orange variant of the Gear 2: 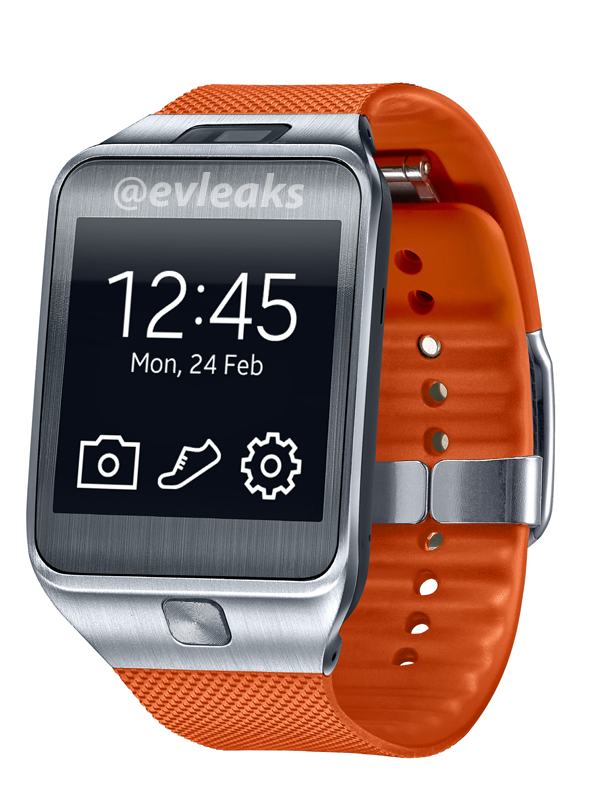 [Weekend Poll] What Would You Like To See Most On The Galaxy S5?