The LG G Flex may be more of a novelty than a true flagship, but if you want one, you can get a pretty decent price on Amazon. Right now Amazon Wireless has the AT&T version of the curvy, bendy phone for just $149.99 with a new contract, which is a full 50% off of AT&T's retail price. Not bad for a phone that's been available for less than a month. 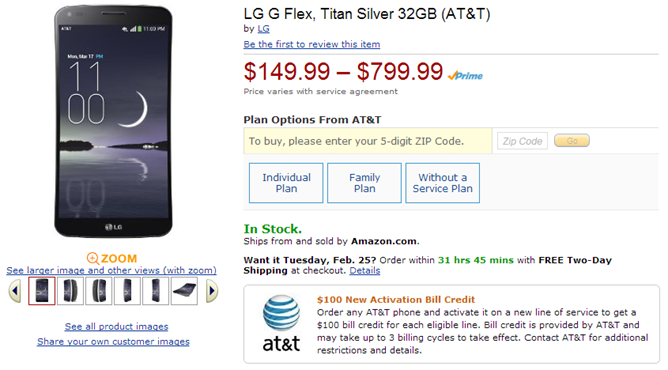 The $149.99 price also applies if you're adding a new line to a family plan. If you're an existing AT&T customer wanting a new primary phone the price is $199.99, which is still a pretty significant discount. Amazon Prime users get the standard two-day shipping for free. Unfortunately Amazon's price for the contract-free phone is $799.99, more than a hundred dollars over AT&T's unsubsidized price (a pretty common tactic for resellers).

Don't forget that AT&T currently has a $100 bill credit for new customers or families adding a new line, and you can get it through Amazon as well. With that credit applied the final cost of the phone comes down to $49.99, though it could be as long as three months until you actually see the credit applied to your AT&T bill. That's still a decent chunk of change if you were intending to get an AT&T phone anyway.

[Deal Alert] Amazon Has $100 Of Bill Credit For Verizon Or AT&T With The Activation Of A New ...