Cell phone service is expensive, especially if you choose to go with one of America's bigger providers. If you get your phones from Amazon today (which is a pretty good idea in any case), you can alleviate that just a little bit when activating a new line on AT&T or Verizon. For the time being, Amazon customers can get a $100 credit on their carrier bills when buying a new phone and activating a new line of service, or adding a new line to an existing account. 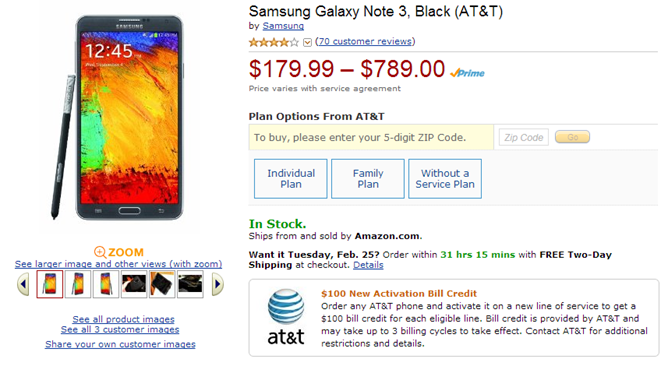 There's fine print, of course. You can't apply the credit to the phone you're purchasing (that's why it's a credit, not a rebate), and you can't even apply it to your first monthly service charge. According to the promotional message on the phones for both carriers, it could take up to three billing cycles (or nearly four months depending on when you set everything up) to see the credit on your account.

Still, that's a hundred bucks you won't have to pay, so if you're forward-looking with your money (or a smooth talker with your significant other) you can probably convince yourself that the phone you just bought is a hundred bucks cheaper. This may be an extension of AT&T's similar discount, but it's the first we've seen of a $100 credit for Verizon. The promotion seems to be active for all AT&T and Verizon phones, with a contract or without, Android or otherwise. There's no telling when the promotion ends, so if you're in the market for a new phone, you might want to move quickly.

Samsung Apps Gets A User Interface Refresh Before The Unpacked Event