There's little doubt that the Chromecast is one of the best tech products released last year, and with the recent availability of the Google Cast SDK, it's on its way to getting even better. While the majority of users probably send content to Chromecast from their mobile devices, let's not forget that there's also a Chrome extension that allows things like Netflix, Play Music, YouTube, and even specific tabs to be beamed over to the TV. 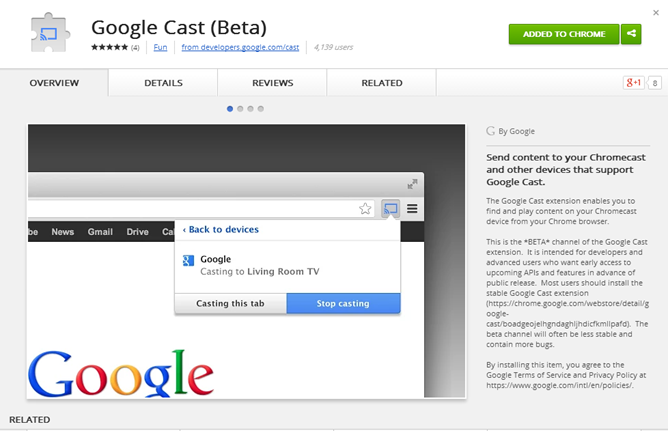 If you'd like to be privy to what Google has in the pipeline for the Cast Chrome extension, there's now a public beta version of the product available. It doesn't seem to be all that appealing at this very moment, but that's likely going to change in the future – this extension will definitely get new features long before the "stable" version (that is the point of a beta, after all – to test new features).

To get in on the action, simply grab this extension and you're good to go. You'll want to disable the stable release, however, to avoid any potential issues between the two. If you're a developer and want more info on what's going on behind the scenes, here are the release notes for the new Cast beta.