Would you spend $400 on a portable Bluetooth speaker? That's the question Jabra's hoping to answer with its new flagship product, the Solemate Max. If you can believe it, Jabra does make a somewhat compelling case at times. The Max falls into the larger end of the portable speaker spectrum, competing with current market favorites like the Logitech Boombox and the Jambox Big, perhaps even the Bose SoundLink III. Compared to those speakers, though, the Max's $400 MSRP is almost stratospheric. So what exactly are you paying for?

The Solemate Max isn't your average portable speaker. Inside its ruggedized housing are 4 speaker drivers - 2 woofers, 2 tweeters - and a proprietary bass reflex design means it puts out powerful low frequency sound. Compared to any other portable speaker I've heard, the Max really does bring the boom. 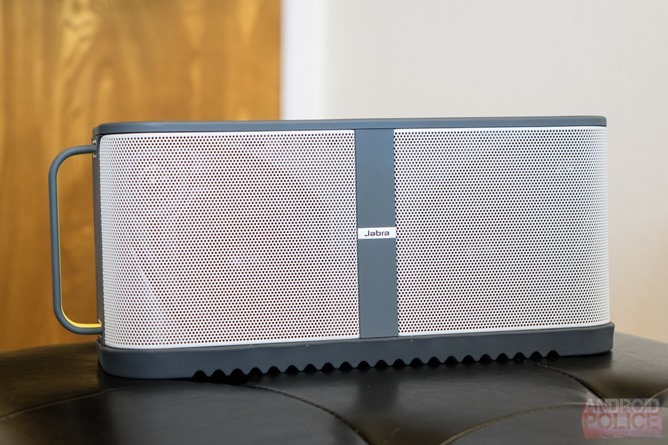 It's not all sound, though. The Max is designed to be resistant to dirt, water, and dust. A shoestring-inspired 3.5mm male-to-male stereo cable is stored on the bottom of the speaker (a really neat idea, if you ask me). It has speakerphone functionality. It can charge your phone. NFC pairing makes getting up and running with most Android devices a snap. And finally, the Max does something very few other portable speakers do: USB audio. Oh, and it has a companion app, too.

But is this impressive feature list enough to warrant a price that is, frankly, hard to justify in such a competitive marketplace? It may be, for the right buyer.

The Solemate Max looks a lot like a larger version of the standard Jabra Solemate, including the trademark shoe-like "sole" pattern on the bottom. (Side note: I really didn't get what the play on "sole" in "Solemate" was about until someone at Jabra explained this to me, making me feel pretty stupid.) Embedded in that sole is a 3.5mm nylon-wrapped stereo cable, which is a pretty trick idea, if you ask me. 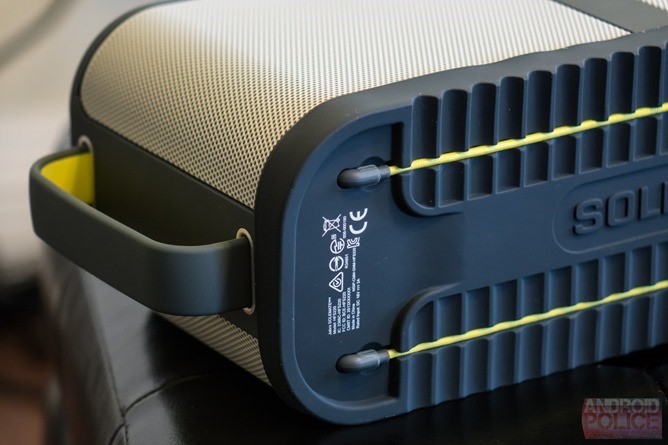 The problem is that putting the cable back in the sole without leaving part of it hanging out, and thus likely to be damaged, is way more work than it's worth. It is certainly doable, but it's far from quick and easy. It's a good concept, but the execution still leaves a bit to be desired, I'd say.

The Solemate Max feels very substantial when you carry it about by its silicone handle, as well it should: the thing weighs over seven pounds (that's a bit over 3 kilos for those of you in metric-land), about half a pound more than Logitech's UE Boombox. It's only a foot across, though, so it doesn't take up a massive amount of space. 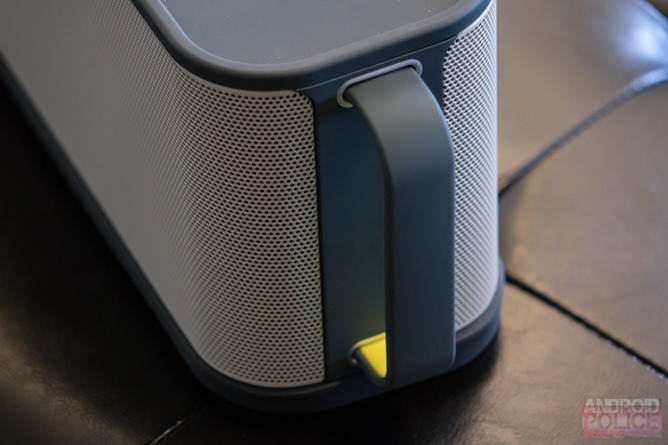 The handle is a really nice touch. I love that it's made of flexible, grippy silicone. That means it doesn't really matter if your hands are wet, you're wearing gloves, or you're being chased by a ravenous horde of the living dead - it makes getting a good grip on the Max very easy. I mean, it looks kind of silly, but it's 100% about function. You could probably even hook it into a carabineer on a backpack, as the handle seems extremely sturdy. Same goes for the bottom, which is made of a seemingly identical material, so the Max won't slide around on pretty much any surface.

The base of the Max is actually angled such that the speaker sits facing slightly upward when placed on a flat surface. This is something many Bluetooth speakers on the market overlook. Oftentimes, portable speakers are placed on the ground or other low-lying surfaces like tables. Having a speaker that sits parallel to the angle of that surface is silly. Your ears aren't on your feet. Or your knees. By pointing the speaker upward, more sound is going where it should, rather than uselessly resonating against your pants. 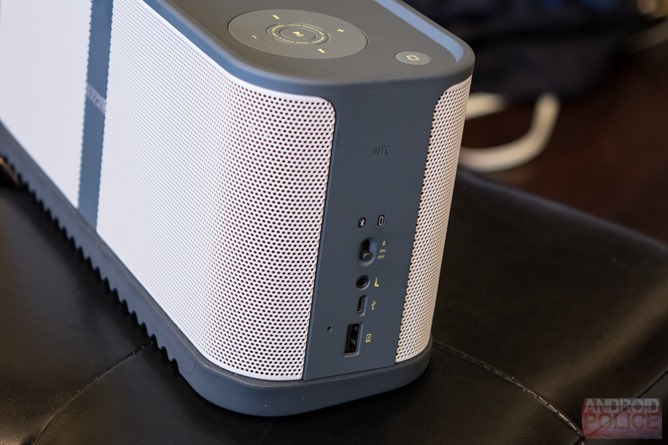 Aesthetically, I'm not exactly a fan of Jabra's design language, but to each their own. The company is obviously playing to the outdoorsy / 'active lifestyle' crowd more than it is to interior designers.

The water / dirt / dust "resistance" claims aren't ones I'm going to be testing for veracity, but Jabra's use of 'resistance' vs. 'proof' does mean you should probably avoid totally submerging the Max or dropping it in a giant bag of flour or other finely milled substance.

The buttons on the top of the speaker are largely self-explanatory (and have a nice tactile, clicky feel), apart from the "talk" button, which is used to answer / end phone calls or read out the current battery level. The power-on switch is actually a switch (yay!), and the speaker vwooooooms to life with a satisfying tone, and then burbles out when you switch it off. 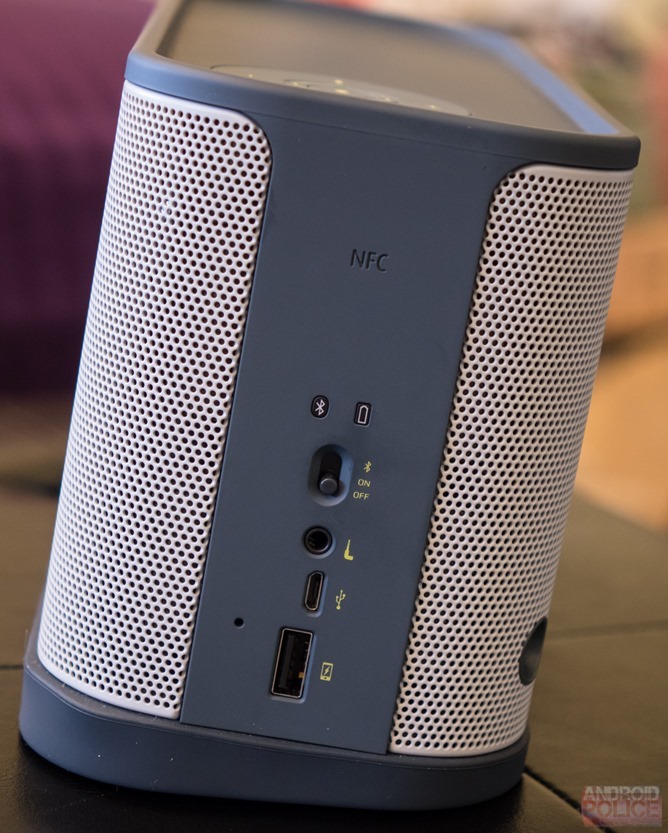 NFC pairing means you can skip the Bluetooth pairing process if you so choose, just tap up against the side of the speaker with all the ports. Audio can be sent to the Max three ways: Bluetooth, 3.5mm stereo, and USB. Yep, USB. The Solemate Max can act as an external sound processor for devices that support USB audio-out, which essentially means most modern laptops. More on that later, though.

The Max can also charge your devices via its second, full-sized USB port, which is certainly handy. Unfortunately, for all the various ins-and-outs offered by Jabra on this speaker, one glaring flaw remains: proprietary charging. Perhaps the size of the battery would make USB charging too slow and tedious, though, so I'm not going to necessarily blame Jabra for this so much as point it out as something anyone considering this product should know going in. I do kind of blame them for the laptop-esque power brick attached to the charger, though.

Oh, there's also a companion app. It's not really that amazing - it requires you to play audio or video inside the app to take advantage of any of the settings or effects, so it's pretty much a "skip" for any serious media junkie. 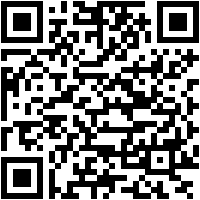 The Solemate Max sounds incredibly good for a Bluetooth speaker. Fidelity is great, but it's really the mids and bass that put the Max a step above most of its competitors. The two woofer drivers, in combination with the bass reflex port, give the Max presence that I simply have not experienced with any other Bluetooth speaker. It's a pleasure for watching TV and movies because of its much wider dynamic range than your typical portable speaker - explosions sound like explosions, for once, because you can actually feel them. 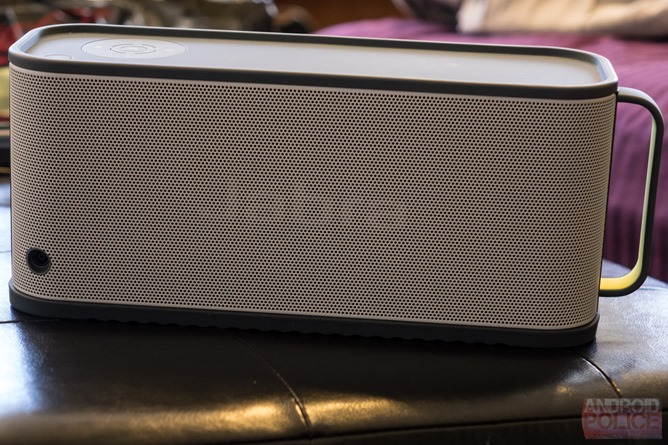 Volume is perhaps the one shortfall of the Max, though that's very likely been done to protect fidelity. Many speakers top out well above the point at which they start to [greatly] distort audio, the Max sounds great all the way up to... the max. At its highest volume, though, it's still plenty loud even for a fairly large room. I wouldn't say it'd be a great beach boombox or anything (wattage is really the name of the game in open spaces), but I rarely have to turn it above 80%.

So, about this USB business. USB audio has significant advantages over Bluetooth and straight 3.5mm from a fidelity standpoint, at least in theory. First, Bluetooth audio quality is just generally inferior to wired sound - there is significant compression and loss. There's also latency, and the general annoyance of using Bluetooth in the first place. 3.5mm audio, while still wired, relies on the source device to process the sound, which is then routed through the headphone jack, using the source device's headphone amplifier. Smartphones don't have outstanding audio processing, and they have fairly weak headphone amps. Laptops aren't all that much better generally (Apple perhaps being the best in this regard). USB audio skips all this, as the sound is sent as raw data and then processed and amplified directly on the Solemate Max. 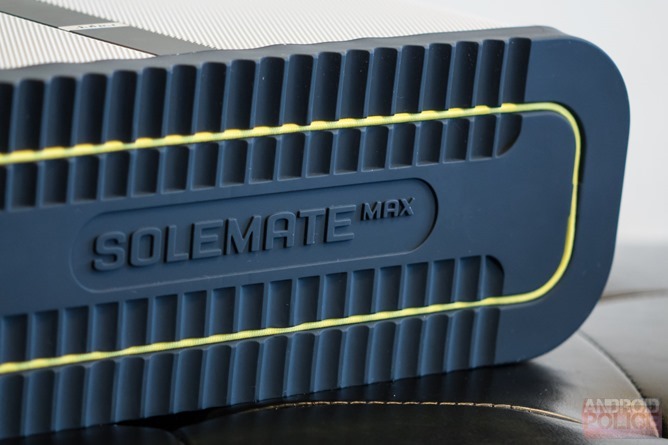 I say "in theory" USB audio is better because it's all about the components on the processing and amplifying device. If the audio processor or amplifier aren't very good, you might not notice any difference in fidelity over Bluetooth or 3.5mm audio. Versus Bluetooth, you'd at least avoid any latency issues, and generally you'd be dealing with a more manageable volume curve than the 3.5mm cable option (since the laptop's headphone amp isn't acting as a pre-amp).

When I tested USB audio from my laptop versus Bluetooth, I wasn't blown away by the difference in quality. It was close enough that I couldn't be sure which sounded better. Volume on USB audio was also universal, so adjusting the speaker adjusted the laptop volume, and vice versa. Oh, and it just worked. I plugged it in, Windows found the appropriate driver in a matter of seconds, and I was up and running. No messing with pairing.

At $400, the Jabra Solemate Max will not be turning the heads of bargain-seekers. Even the phrase "good value for money" is one I have a hard time even considering with the Max. You do get what you pay for - an incredibly good Bluetooth speaker with tons of features, amazing sound, and outstanding battery life. It also just looks and feels very premium. Jabra's done an excellent job here.

But four-hundred dollars? That's a hefty sum for even a great Bluetooth speaker. At $300, I think the Max would be an easy sell - and that's a mark it may well hit on online retailers eventually, though it's still full price on Amazon at the time of this writing. Perhaps $350 may even be the "sweet spot" Jabra has to hit to really move these things - we'll see. With competitors like the Big Jambox being heavily discounted ($216 if that link's price changes), the Solemate Max definitely has an uphill battle ahead of it. I guess the question really is: how low will Jabra go?

Considerations of value aside, the Solemate Max is an absolutely brilliant Bluetooth speaker. The only complaint I have about it is the proprietary charging interface - that is literally my entire list of gripes. I have never reviewed a portable speaker that I have so struggled to find negatives about, but the Max really is that good. It may not meet everyone's list of necessities in a speaker, but it's such an excellent all-around product that I don't think anyone could be legitimately unhappy with it - there's something for everyone here.

That said, value is always a consideration, and $400 is a lot of dough to throw down on a portable speaker. You have to be seriously interested in a top-of-the-line portable audio experience, and while the Max delivers, at that kind of price point buyers are bound to be exceptionally picky. The Max's laptop-brick of a charger and power-on/off noises could be deemed unacceptable nuisances - but I'll leave that to you to decide. Regardless, the Solemate Max is a truly impressive product, albeit one that will put a sizable dent in your wallet. 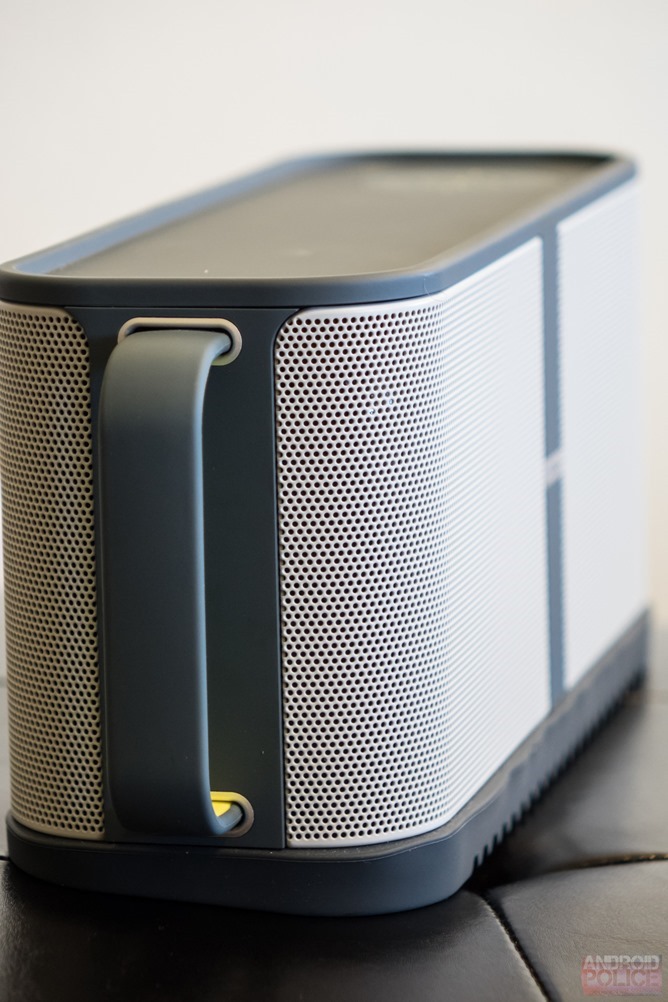