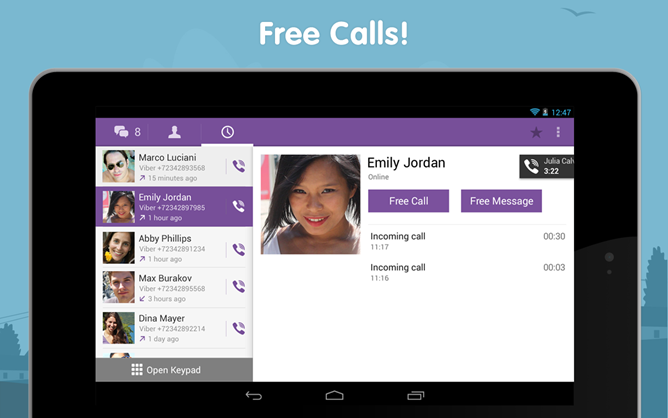 Viber is primarily a Skype competitor, though it also offers text and picture messaging, group chat, and cross-communication between mobile and desktop operating systems. Indeed, the company's dedication to being available on as many platforms and in as many locations as possible seems to have been a major plus - according to TechCrunch, the service has 225 million registered users. Viber offers discounted calls to cell phone numbers and landlines plus in-app purchase "stickers" for basic monetization.

What will Rakuten do with Viber? Presumably the same thing they've done with Kobo: try and use their economic muscle to make Viber viable and profitable. Rakuten seems to have a rather hands-off approach to the companies it acquires, so it's unlikely that regular users will see any drastic changes in the short run, aside from perhaps the addition of "A Rakuten Company" to marketing materials. The Viber Android app itself has been consistently updated since its debut in July of 2011.

TOKYO--(BUSINESS WIRE)--Rakuten Inc (4755:Tokyo), one of the world’s largest Internet services companies, announced today its acquisition of pioneering messaging and VoIP company, Viber. Rakuten will acquire Viber for a total consideration of $900 million. The acquisition represents another bold step for Rakuten into the digital content space, following its acquisitions of Kobo, Wuaki.tv, and Viki.

As people continue to shift from traditional content and communications platforms to mobile applications, Viber, one of the most popular mobile communications services worldwide with a rapidly growing global user base of 300 million registered users, perfectly complements Rakuten’s strategy in the digital space. As Rakuten aims to become the world’s No.1 Internet services company, this acquisition will enable Rakuten to penetrate new markets with multiple digital content offerings, in combination with its e-commerce and financial services platforms.

With 40 different services, Rakuten has built one of the world’s most robust and dynamic Internet services ecosystems, centered around a unified ID membership database that features the enormously popular and successful online Rakuten Super Points rewards program. Viber’s fun approach to messaging and high quality VoIP services is a perfect marriage with Rakuten’s digital content offerings and its “Shopping is Entertainment” philosophy laying the foundation for the world’s most comprehensive and engaging daily online platform. The combination also unlocks massive new potential markets for Viber through Rakuten Group’s roughly 225 million global members.

“I am tremendously excited to welcome Viber to the Rakuten family. Viber delivers the most consistently high quality and convenient messaging and VoIP experience available. Additionally, Viber has introduced a great sticker market and has tremendous potential as a gaming platform. Simply put, Viber understands how people actually want to engage and have built the only service that truly delivers on all fronts. This makes Viber the ideal total consumer engagement platform for Rakuten as we seek to bring our deep understanding of the consumer to vast new audiences through our dynamic ecosystem of Internet Services.”

“Rakuten is one of the world’s most important Internet companies. It is truly dominant in its home market of Japan and has been rapidly expanding globally. This combination presents an amazing opportunity for Viber to enhance our rapid user growth in both existing and new markets. Sharing similar aspirations with Rakuten, our vision is to be the world’s No.1 communications platform and our combination with Rakuten is an important step in that direction.”

Rakuten began its march into global digital content in 2012 with the acquisition of Kobo Inc., one of the world’s fastest-growing eReading services, that now offers 4 million eBooks, magazines and newspapers to customers in 190 countries. In 2012, Rakuten acquired Wuaki.tv, an innovative Europe-based video-on-demand and streaming service, which recently began its international expansion beyond Spain by offering customers in the UK its premier movie titles catalogue and unique hybrid payment model. More recently, in September 2013, Rakuten acquired borderless digital content platform, Viki, which now reaches 65% of its 30 million monthly users through mobile devices.