I've said it dozens of times, but I'll say it again: there aren't enough eight-inch Android tablets. When the iPad Mini was announced, I assumed more manufacturers would jump on the form factor, but nope – there still aren't that many. Needless to say, when HP announced the Slate8 Pro, I was intrigued. It's an 8-inch tablet with a 4:3 aspect ratio, which treads directly on the iPad Mini's territory. Of course, we have to be realistic here – it's an HP tablet, and so far there hasn't been anything really remarkable coming from them.

Still, I kept an open mind when I cracked the box open. The 4:3 aspect ratio is surprisingly refreshing and not at all difficult to adjust to. In fact, I believe I prefer it over 16:9. The build quality looked good, and the snow white back was a breath of fresh air for an HP tablet. It looks really good. Classy.

Of course, the real test is using it. So I did that for a few weeks. I initially really liked the device, but then discovered one fatal flaw.

This section of the review is posted after-the-fact, when updates to the device show up post-review. The changes highlighted here may not be reflected in the text body (i.e. price drops, Android version updates, etc.). All updates will be linked to the appropriate coverage outside of this review. 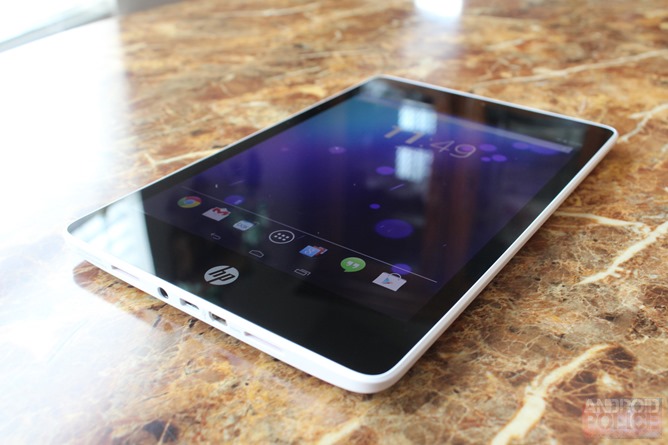 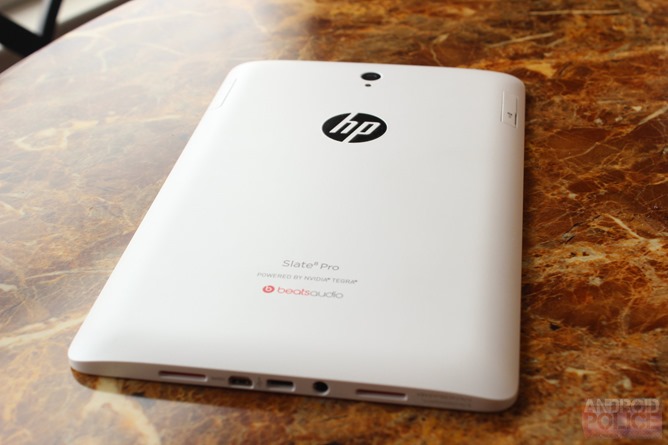 One thing HP has never been known for is building sleek and sexy tablets. You can take a look at any of the company's Android tablets to verify this – they're basically ugly gray slabs (for the most part, anyway). While the Slate8 Pro doesn't drastically deviate from the normal HP design, it does look a lot better than any other HP tablet I've seen, mostly because of the "snow white" color. It's a very subtle flat white with a black HP logo on the back. The back and sides are one solid piece that wraps around to the front of the unit, and the whole thing has a really classy look (well, maybe aside from the Beats logo on the back).

The overall device layout is fairly typical for the most part: power on top, volume on the right side (it's kind of on the back, actually – the sides are tapered), covered microSD card slot on the left, and everything else – microHDMI, microUSB, headphone jack, and speakers – are on the bottom. To me, the power button is undersized and too recessed into the tablet's top, and it actually feels a little odd having it there in the first place. It would make more sense to put it in the place of the SD card slot, especially since other HP tablets (like the Slatebook X2) have used this type of layout. The volume rocker is basically flush with the tablet's surface, but I didn't find it too difficult to hit without looking.

The overall build quality of this tablet is fantastic. It feels really well made – all the seams are flush, buttons aren't creaky, and there are no "soft spots" to speak of. It absolutely feels like a premium piece of kit. The primary complaint I have is with the stupid power button – it's just too recessed. 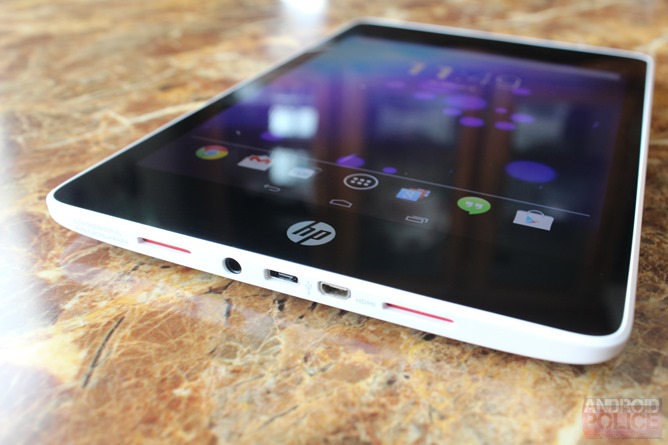 On past HP tablets, the display has been one of the biggest letdowns because of poor color reproduction. On the Slate8 Pro, the story is a little bit different.

The display itself is actually pretty good. The 1600x1200 resolution clocks in at roughly 250PPI, which isn't too shabby and makes for a decent reading experience. In fact, because of the increased display size, I've been reaching for the S8P over the 2013 Nexus 7 the majority of the time if I plan on reading. Or watching videos. Or surfing the web. Really, I go for the S8P over any other tablet I have for everything... except if I'm going to be doing a fair amount of text input. That's where there's an issue.

I'm not sure what's causing it, but typing on the Slate8 Pro is a very weird experience. I use SwiftKey on pretty much all my devices, but when typing on the S8P, rapid typing causes phantom taps in the center of the display, which in turn causes SwiftKey to detect those as swipes; when using a keyboard without gesture-based input, it basically ignores half of the keystrokes altogether. It's quite annoying. The solution? Type slower. Not painfully slow, but to the point where you have to be aware of every keystroke and pay close attention to what's going on.

While I'm not sure the exact reason for the issue, I can show you what's happening. Thanks to Yet Another Multi-touch Test's "paint test" option, it's clear what's going on here:

Let's just hope this is something that HP can fix with a software update, because it's bad news if it's hardware related.

Other than that, the display on the the S8P is actually pretty good. Of course, the touch bug is a huge issue.

Update: The above issue has been fixed in a small OTA update. The display now responds just as it should. 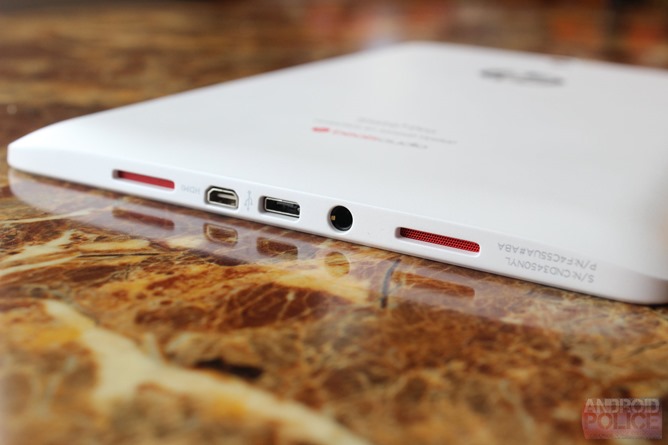 Right now, you may be asking yourself "why the hell are they red?" And for that, I have a very logical answer: Beats. The HP Slate8 Pro features Beats Audio. I know you're excited about having this "studio-inspired experience so you can hear your favorite artists the way they should be heard," so let's talk about that a little bit.

Here's the gist: it's a bass boost. And you can't really even tell without headphones. Also, it adds a little Beats icon in the notification bar, next to the clock. I will say this, though: the bass boost is pretty dynamic. It's very fluid and moves with the music, unlike the stock EQ option in Play Music, which feels dry and compressed in comparison. So for that, I'll give Beats some credit.

With that out of the way, the speakers are still tablet speakers. They're small, so don't expect them to sound huge. Since they both face the same direction, they're easy to cover. They're not really for listening to music or anything of the sort, but they'll get the job done for videos and movies. They get pretty loud, which is always a plus.

In the right lighting, the S8P's camera is actually pretty decent (for a tablet cam, anyway). Like so many other mobile cameras, however, it basically sucks in low light situations. Color reproduction is decent enough for a quick snap to share on social networks and whatnot, which is probably the only thing anyone users their tablet's camera for in the first place.

Outdoor photos are OK for the most part, but can easily get washed out in bright light 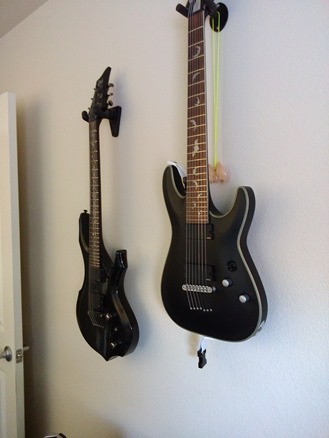 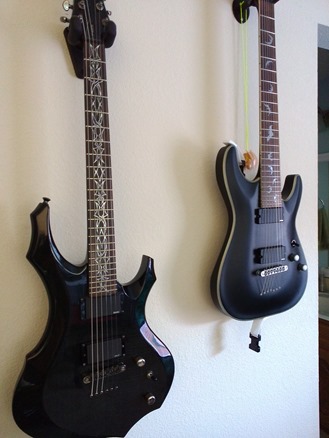 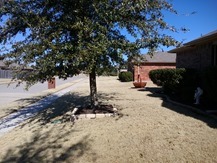 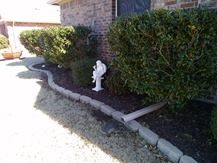 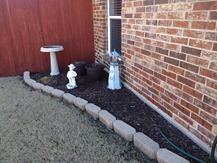 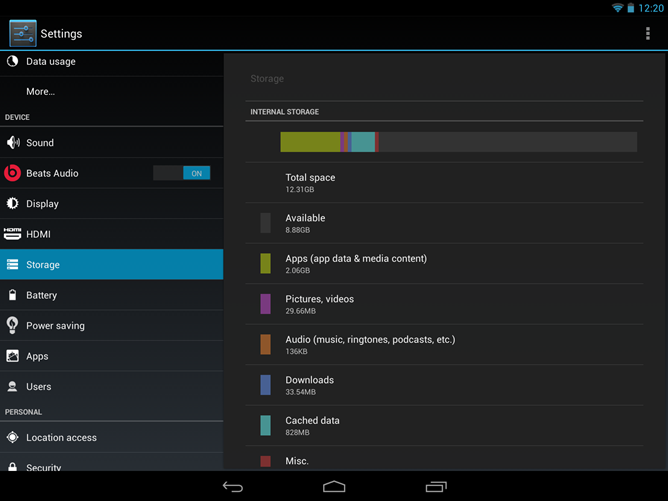 Like so many tablets coming out these days, the Slate8 Pro ships with just 16GB of internal storage. Of course, there's always the "but it has an SD card slot!" argument – let's not kid ourselves here, an SD card is only good for certain uses, like music, movie, picture, and document storage. You can't move apps to external storage in most cases, so if you're the type who likes to pack your 32GB device to gullet with games and such, 16GB just won't do it for you. For most uses, however, it's probably decent enough.

One thing that I noticed during my time with the S8P is that it has much shorter Wi-Fi range than most of my other tablets. I have five different wireless networks at my house, and only one of them has access points at both ends. I normally connect to "my" network without issues anywhere in the house, but the S8P can't seem to hold on to that when I go to the opposite side of the house (which is about as far away from the router as possible). It will still show a weak connection, but getting anything to actually load is another story altogether. It just doesn't happen, regardless of whether I'm on the 2.4GHz or 5GHz network. I always have to switch to the other access point, which is mildly annoying.

The Slate8 Pro packs a 5,680mAh battery, which is large enough to easily provide a couple of days worth of juice, assuming you don't stream Netflix or play games for twelve hours a day. The idle time is pretty solid on the S8P, and nothing like what I saw with the Slatebook X2, which would just drain pretty steadily overnight.

On average, I had to throw the device on charge every other day while using it as my main tablet. That included a little gaming, but mostly watching YouTube videos and lots of web browsing – about five to six hours of screen-on time total. Even after that, the unit never went below 30%, so I think it's safe to say that you could get a solid eight hours out of it without fear of it dying. 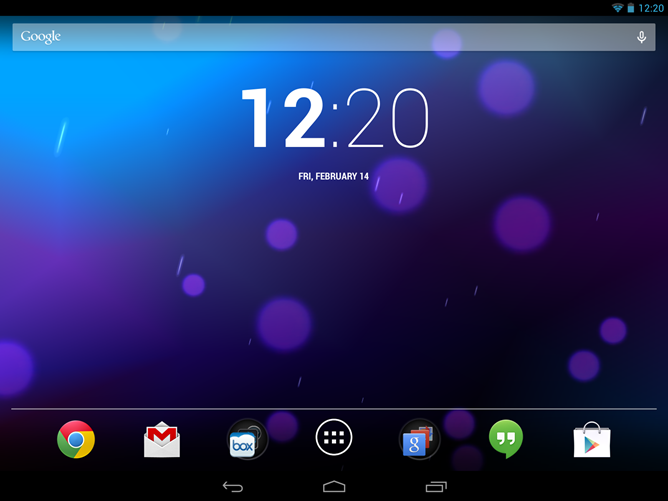 On the software level, the Slate8 Pro is basically a stock Android 4.2.2 device, with a few Tegra-enhanced features (like Miracast Wireless Display and processor power saving tweaks) and Beats Audio. Other than that and an ever so slightly different lockscreen, it's essentially stock Jelly Bean.

So, yeah. Not much going on in the UI department outside of the norm here – stock launcher, stock notification bar, basically the stock settings menu, and all that jazz. HP didn't do a lot in way of modifications to the system at all, actually, aside from pre-load a handful of things. Let's talk about those.

And that's that. In terms of pre-loaded software, it's not the most bloated device we've ever seen, and some of this stuff is actually kind of useful (like HP File Manager and Kingston Office, for example). Really, the software is rather unremarkable – it's just Android, you guys.

When it comes to performance, I've noticed a few things. Once everything is up and running (when you're actually using the tablet), it runs smoothly. Sometimes, however, the unit has a hard time waking from sleep, especially if the screen has to rotate in order to wake in the correct orientation. I actually attribute this to the device only having 1GB of RAM, because there are also moments of noticeable hesitation when switching between "heavy" apps, games, and the like.

Once in a game or an app, however, it's as smooth as any other high-end device I've used. The Tegra 4 sings in processor- and GPU-intensive tasks, which of course makes gaming a very pleasurable experience (the screen size is also great for games). It had no issues handling anything I threw at it once the application was launched, but as I've already said, the single gig of RAM is definitely noticeable here. 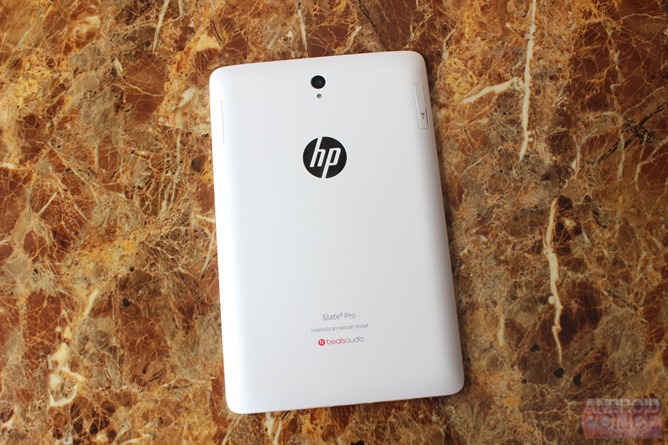 I want to love this tablet for several reasons, but for each positive quality it possesses, there's an equally as destructive flaw. The size is nigh perfect, and the 4:3 aspect ration, while initially different, is pretty fantastic. The display is probably the best I've seen on an HP tablet (which, honestly, isn't all that difficult to do), but the touchscreen bug is a huge flaw. The fact that it only has one gig of RAM is a downer, though I'm not sure I'd call it a dealbreaker – especially if HP would update this badboy to KitKat. That would likely remove all hints of hesitation. Of course, it's a coin flip whether or not HP will actually send a software update through.

As it stands right now, it's difficult to recommend this device to anyone, mainly because of the touchscreen glitch. If that can be fixed with an over-the-air software update (and HP actually provides the fix, of course), then it's an entirely different ballgame, and I would readily recommend this device. That recommendation, of course, hangs in the balance until that day comes.

Motorola Extends Its 'Sweet Deal' On The Moto X, Off-Contract Phone Now $70 Off Through ...