Compared to 7 or 8 inches, 10 may seem like a lot to work with. But you know what? Boom, here's 12. These extra 2 inches come to us courtesy of Samsung. The company unveiled the new Galaxy Pro series at this year's CES, and the devices have gradually percolated to consumers throughout the world since. Today Samsung has shared pricing and availability information for Canada. The Galaxy PRO devices will roll out to various retailers starting now until the end of March. 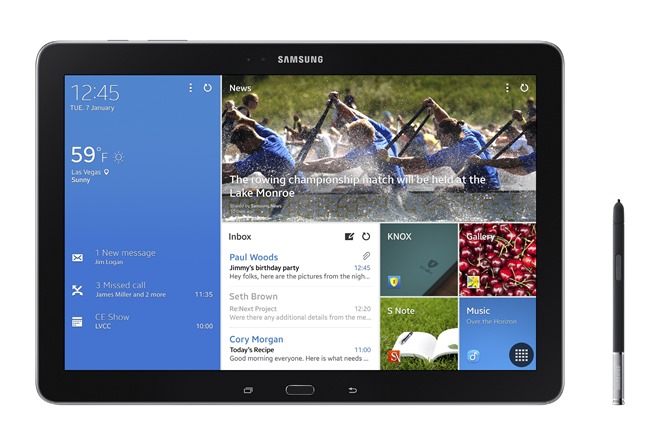 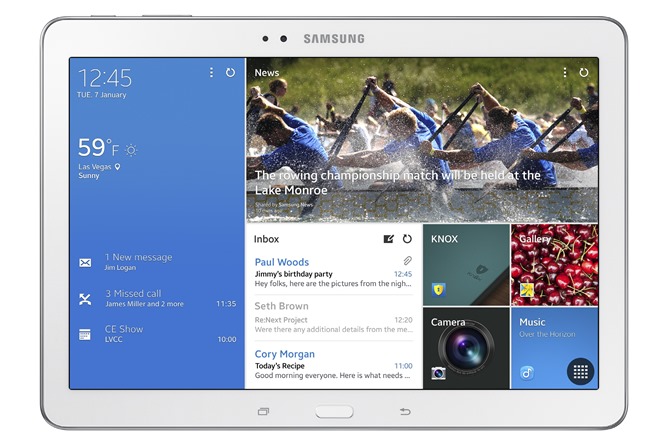 MISSISSAUGA, ON, Feb. 12, 2014 /CNW/ - Samsung Canada, market leaders of innovation and progressive design in the mobile industry, today announced the Canadian availability of the Galaxy PRO Series, allowing Canadians to Play More, Do More and Share More. Rolling out to retail shelves at the end of February through to the end of March, the PRO Series offers a superior viewing experience and unmatched productivity tools that will make Canadians feel like a PRO in every situation. The GALAXY PRO Series includes the GALAXY NotePRO which comes with a 12.2-inch screen as well as the GALAXY TabPRO which comes with a 12.2-inch, 10.1-inch or 8.4-inch screen.

The GALAXY NotePRO 12.2 and GALAXY TabPRO 12.2 are the world's first tablets to employ a 12.2-inch WQXGA Widescreen (16:10) display, which offers more than 4-million pixels and a crystal clear resolution (2560X1600) for the ultimate Full HD viewing experience. Equally impressive, the GALAXY TabPRO 10.1 (2560X1600) and GALAXY TabPRO 8.4 (1600X2560) screen resolutions allow users to experience their favourite content like never before. Combining premium style with powerful performance, the new tablets are perfect for every type of user and integrate seamlessly with Samsung smartphones and UHD TVs to create an unparalleled second screen experience.

The GALAXY PRO Series of devices will be rolling on to retail shelves in Canada from late February to the end of March through select Canadian retailers including: Costco, Best Buy, Future Shop, Staples, The Source, Target and Walmart. MSRP is as follows:

*Note: All GALAXY PRO Series models may not be available at all retailers.

Perfect for Every PRO, the Ultimate User Content Gift Package:

Exclusive to Canadian consumers, Samsung GALAXY Pro customers receive a special offer to access three months of Next Issue Canada, which offers readers easy, unlimited access to a catalogue of more than 125 popular Canadian and U.S. magazines, including Maclean's, FLARE, Vanity Fair, Vogue, Sports Illustrated and Chatelaine, plus their back issues, all in one app.

Hands On With Blu's Life Pure Mini: A Decent Mid-Ranger With A Simplistic Interface