It was just a couple of days ago that HTC started talking up its plans to hit the midrange hard this year, and lo and behold, there's at least some evidence that the company is ready to make good on that commitment. Chinese site MyDrivers.com posted what looks like a press render of a new HTC device, which Engadget later corroborated with their own render. The Chinese site calls it the Desire 8. 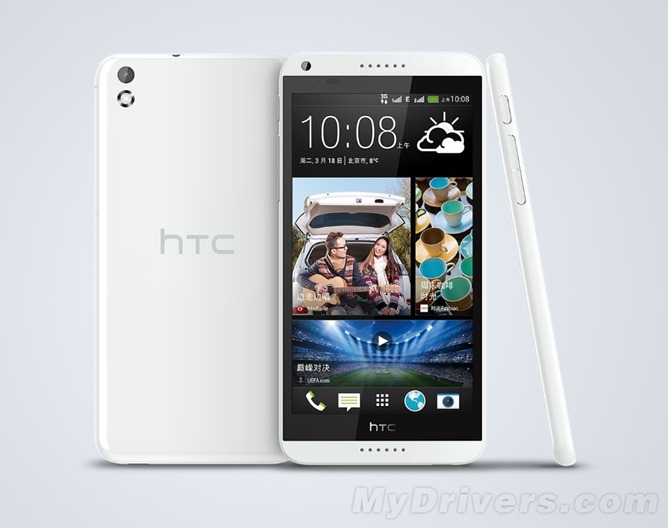 According to the source, what you're looking at is a 5.5-inch phone with a 13-megapixel rear camera and a 5-megapixel front shooter, which matches the admittedly vague specs floating around for the HTC One successor. The body is sterile white plastic, a mix of the original One X and the 2013 One's design with a big bezel and front-facing speaker. Significantly, this render lacks navigation buttons. If you assume it's real (which is a big assumption), it could be explained by an HTC graphic designer popping an older screenshot onto a current hardware design. The home page in the photo matches the current version of Sense, not the newer one recently leaked.

It's entirely possible that this model might not make it outside of Asia - HTC seems to be keeping the focus on the One family in the lucrative North American and European markets, with a few smaller exceptions. The design of the Desire 8 itself looks nice, especially considering its size, though I could do without the gap between the bezel and the casing. Here's hoping it turns out to be real.

LG Teases The G2 MINI, Will Make An Announcement At Mobile World Congress On February 24th