King.com isn't doing a lot to win positive publicity lately. The company's aggressive strategy toward establishing IP dominance in the industry has won the ire of most of the web, and for good reason: it's kind of super asshole-ish.

Another story of King's evil started to gain traction today, in the form of an open letter from the developer of a game called Candy Swipe. 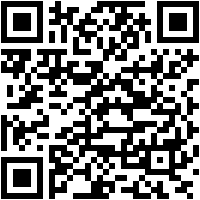 The developer of Candy Swipe, Albert Ransom, filed his trademark for CandySwipe in 2010 under his company Runsome Apps, Inc. CandySwipe is a pretty typical Bejeweled "match 3" clone - one of thousands of such games to be developed in the past decade-plus since that game was originally published. (As an aside, Mr. Ransom's is not the first such game to be candy-themed. See: 1, 2, 3 - there are doubtless more examples, too.)

Mr. Ransom makes a point of the two games' high level of similarity. Agreed - they are both candy-themed, grid-based match three games, that much is clear. He also points out some of the visual similarities between the two games in this diagram.

He goes on to say: "Two years after I released CandySwipe, you released Candy Crush Saga on mobile; the app icon, candy pieces, and even the rewarding, "Sweet!" are nearly identical."

Now, before you go screaming "ripoff," it's important to recognize a couple of things. First, this diagram is arranged such that you are supposed to see a similarity between the assets (same background, similar size, spacing, sorted by color, etc). CandySwipe's assets, however, aside from the "Sweet!" dialog, really only vaguely resemble those of King's. None of the objects are actually the same, and the lemon drop vs the candy corn and the two icons with multiple items are actually pretty poor matches. Only two of the candy objects are even shaped similarly. When pointing to the app icons, CandySwipe also fails to mention they don't use that particular icon anymore. The "Sweet!" dialog, I admit, is more than a bit suspicious.

Regardless, what's missing here is a more telling side by side of the two games, one that paints a markedly different picture. 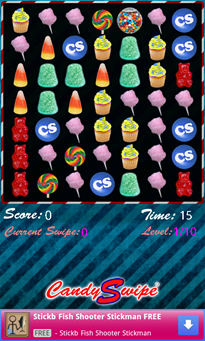 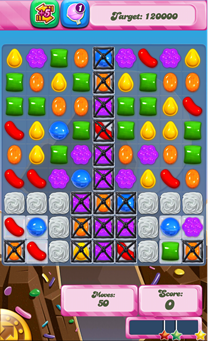 I ask, honestly, would you say these two look confusingly similar? There is no wrong answer to that question, but think about it this way - if you were given 5 random screenshots from each game, unordered, could you sort them into two piles correctly? This, I think, is where Mr. Ransom's implication that King stole his idea is a bit more tenuous.

Anyway, I want to be clear: I am not trying to tear down Mr. Ransom's argument so much as I am trying to show that this story isn't as cut and dry as perhaps our guts might all want us to think. And, yes, there are yet more complications to explore.

King.com was not the first actor in this scuffle - Mr. Ransom was. He filed an opposition to King's trademark application for Candy Crush Saga (note: this is not King's trademark for the word "Candy," but the one specific to "Candy Crush Saga"). He presents more than ample evidence, too, of actual confusion between the two companies' products. Hundreds of instances of users either downloading his game believing it to be King's title or calling Ransom's game a knockoff. We all know that hurts - Mr. Ransom clearly put a lot of time and effort into his product, achieved millions of downloads, and all to see its visibility swept away by a company whose own, similar product becomes nearly ubiquitous thanks to advertising and money. And came out 2 years later, to boot.

Mr. Ransom is understandably mad that King's product has essentially pulled the rug out from under his own aspirations, and taken a likely very sizable hunk of his customer base with it. That sucks. That part, though, is as they say, business.

King's response to Ransom's opposition to their trademark filing was pretty rough. And now, it seems they're playing hardball - King purchased a trademark predating CandySwipe's filing date and are now seeking to cancel Ransom's trademark on the basis of that old mark. From the motion to amend:

It recently came to King’s attention that AIM Productions N.V. has used the mark CANDY CRUSHER since at least as early as 2004 in connection with game software, including use as a mobile application game available for download in the United States. These common law rights pre-date Runsome’s earliest asserted use date by years.

The legal reasoning provided by King is sound, as well. Ransom's argument was predicated on Candy Crush Saga and CandySwipe being confusingly similar marks. King now retorts that Candy Crusher (which in its filing claims mobile software games in its scope) is so obviously similar to Candy Crush Saga and Candy Crush that by a legal principal known as "tacking" King has now essentially owned the right to Candy Crush Saga since 2004, when the trademark application for Candy Crusher was filed. Yes, this sounds kind of messed up. Yes, this is how trademark law works, and the argument does logically follow on that basis. Whether King's motion to amend its opposition will go through remains to be seen (it likely will), but Ransom already has given up anyway.

What happens to Ransom's app? He'll probably rename it such that the title lacks the word "candy" and develop some new copy as necessary. Or let it die. He could actually keep using the name, but to do so would essentially be daring King to sue him, which at this point they'd probably be all too happy to do, if not essentially legally obligated by the events that have transpired.

Unfortunately, the moral of the story is, more than anything, don't get in the way of a multi-billion dollar company's trademark filing unless you have the means to see it through. While I genuinely believe Mr. Ransom thought he was fighting the good fight and protecting his business, the fact is, he did start the fight. Who's to say what King would have done if he hadn't opposed the filing - maybe nothing at all. And what choice did they really have? To simply give up on filing for the "Candy Crush Saga" mark? We all know that's not realistic. And even if you hate King, their right to trademark the game's full title isn't exactly controversial.

I don't think either party was totally in the right here - King's dirty tactic of buying up an old mark to try and cancel Ransom's is scummy indeed. It's exactly the kind of thing they should deservedly get a bad rap for. But I do think this whole situation is a bit different from the "Saga" nonsense or trying to get a mark on "Candy" by itself, in that it's not inherently King's fault it went down like it did. Sadly, it seems someone's small business was caught in the crossfire, though.

Open letter to King. Thanks, +Nate.