Kickstarter campaigns are sometimes guilty of overpromising, but if the just funded Dash in-ear headphones can get even close to what the creators claim, this is going to be amazing. These tiny earphones are completely wireless – just two individual buds that you plug into your head holes to listen to music, track your activity, and even take calls. It still has 47 days to go and is already past its $260,000 goal.

Rather than just make some wireless earbuds, the people behind Dash want to do it all. In addition to piping music into your ears over Bluetooth 4.0, the Dash has 4GB of flash storage to store tunes internally. Music playback can be controlled from an app, or by tapping and swiping the exposed ends of the Dash (the left ear is tracking and the right one is sound). There will also be an integrated thermometer, accelerometer, and optical sensor. This gives you all your vitals and steps as you're out and about. As for calls, the Dash will also have a built-in bone conduction mic (is this starting to sound fanciful yet?). There is also a 100mAh battery in each bud. 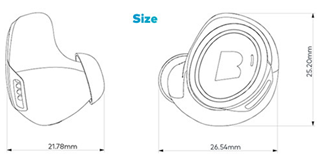 The buds are supposed to be ergonomic and stay jammed in your ears. If not, these things aren't going to last long. If one tumbles out, there's nothing to keep it from hitting the ground. The Dash will support Android at launch, which is supposedly in October or November of 2014. If you want to take a chance that these headphones are going to live up to the promise, the $199 deal is still open.

Google Voice Search Now Allows You To Make Calls Or Send Texts Based On Relationships With ...

PSA: App Downloads From The Play Store Are Failing With Error 403 For Some, Best To Wait It Out ...