The Motorola direct price on the Moto G is great, but some carriers have opted to sell the phone even cheaper in an attempt to lure customers. US Cellular is following Verizon's lead today in offering the Moto G for just $99.99 off-contract. It's live on the US Cellular website right now and will be in stores February 10th. 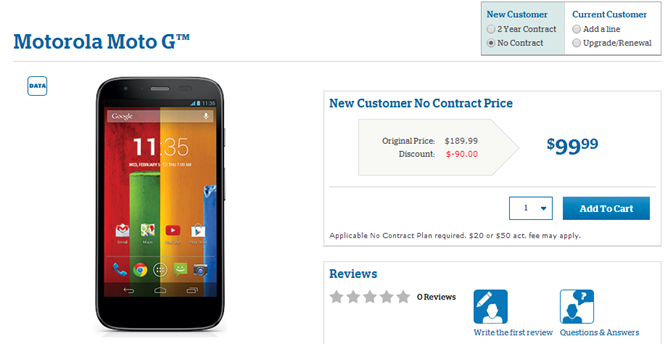 The Moto G is $179 from Motorola as an unlocked GSM device, so you're saving a fair amount if you don't mind sticking with USC. The internals are identical to the other variants of the G – 8GB of storage, 4.5-inch 720p screen, quad-core Snapdragon 400, and Android 4.4 KitKat. No LTE, though.

The device is intended to complement US Cellular's new no-contract plan, which includes unlimited voice, messaging, and data (500MB high-speed) for $50 per month.