Most games are just about entertainment, but sometimes you can do a little good too. Play to Cure: Genes In Space is a mobile game developed for Cancer Research UK as a way to get people all over the world involved in sorting through real genetic data and help scientists get a handle on the causes of cancer. Also, there are space ships.

In the game, you are collecting Element Alpha, which is a made up thing. You chart a course through fields of the glowing blue stuff, and you want to hit the most dense areas, of course. What you're really looking at is DNA microarray data. One of the best ways to determine what is causing cancers is to find out which genes have been lost or duplicated among sufferers. A DNA microarray looks at the gene frequencies in thousands of people, but that data has to interpreted. 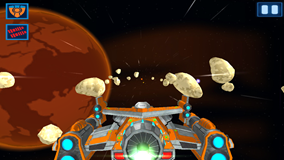 When you fly through the Element Alpha, you are actually showing researchers where the copy number variations begin and end in the array data. Gene variations that are more common are more likely to be important in treating cancer. Computers can do some of this without human intervention, but humans are actually better than current software at noticing subtle changes in patterns, like in the DNA microarray data. The game isn't hugely challenging, but it's potentially really important stuff.