So, Android-powered game consoles are a thing. Whether anyone likes it or not, this is a direction that some companies are going, trying to reshape how we think of traditional gaming. It kind of started with the OUYA, a $99 Android console that takes a unique approach to the gaming console, as well as Android itself. It doesn't have the Play Store, but instead OUYA's curated game store where all games are free to try. It's a noble gesture, sure, but let's be frank here: it sucks to have to re-buy all the games you've already bought. No one wants to do that.

Then there's SHIELD, NVIDIA's take on the portable console that can also double as a TV-connected unit with the new(ish) Console Mode. It's more of a traditional Android device in terms of operating system, comes with Google Play, and tries to make the best of its unusual form factor with game- and software-specific tweaks. The list goes on from there with smaller names like GameStick and the multitude of new crowdfunded projects that hit on a regular basis from people who think they can do gaming better. 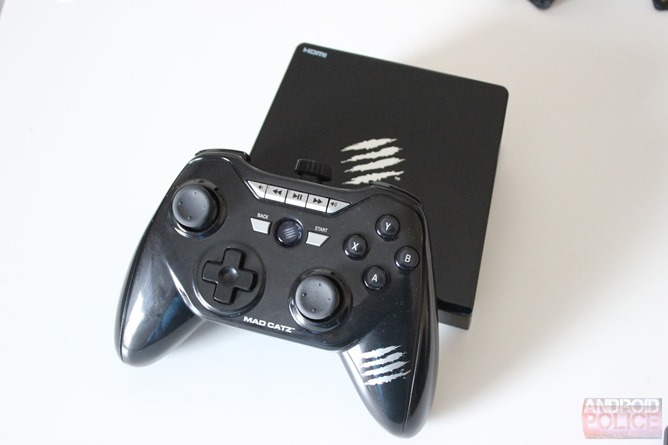 Now we have M.O.J.O. (which will be stylized as MOJO moving forward because I don't want to type all those damn periods every time I mention its name) by Mad Catz. For those who may not know the name, Mad Catz is known for its gaming peripherals for both PCs and consoles like Xbox and Playstation – they make keyboards, mice, gaming controllers, headsets, and the like. As far as I know, this is the company's first try at a console of its own. Under MOJO's hood, you'll basically find the same guts as SHEILD: a Tegra 4 chip, 2GB of RAM, and 16GB of internal storage. The whole thing's powered by a mostly-stock build of Android 4.2.2, which works fine for what this is. It ships with everything you need to get started: the console, power cable, HDMI cable, and Bluetooth gaming controller that also works with Windows PCs and other Android devices. It even comes with a removable clip that can hold a smartphone, a la MOGA.

MOJO is a small-ish black box with a pleasant blue light on the front. It's an always-on device (there isn't a power button at all), so the light stays on constantly. I haven't found a way to disable it, which may be annoying for some. The unit itself feels well put-together, but the odds are you're going to throw it on a shelf and never touch it again. It's definitely built well enough for that. The controller feels pretty solid (much better than OUYA's, at least), but it's not SHIELD-quality. Aside from the normal game functions, it also has built-in volume and media controls, and offers three different modes: game, mouse, and PC. The two former options will work on MOJO, but the latter is obviously for use on a traditional PC. The biggest downside of the controller? It takes two AAA batteries instead of being rechargeable. Boo!

After firing up MOJO for the first time, one thing became apparent to me: navigating a software keyboard with a controller is annoying. It takes forever to use a keyboard designed for touch by A) navigating each letter with the D-Pad, or 2) using mouse mode to hit each letter. To better the experience I strongly suggest a Bluetooth keyboard of any kind. It will make it much easier to sign in to different accounts, surf the web, or any of the other things that MOJO can do outside of playing games.

Navigating Android with MOJO's controller takes some getting used to, as it doesn't work exactly like I expected (granted, that could be because I'm used to how SHIELD does it, which I've found to be very straightforward and intuitive). While in the OS, mouse mode is probably the best way to get to where you're going, though game mode also works. That said, as soon as a game is launched, the controller needs to be switched into game mode. Get ready to flick that little button pretty often when using MOJO.

From there, it's just Android. It's familiar, so navigating it becomes thoughtless. I really wish there were an easy way to hide the navigation and notification bars for a full-screen experience, however. The Play Store is present, but MOJO has faced issues with content. Rooting the unit essentially remedies this quandary, though Mad Catz can't ship it rooted. It's a very straightforward process, however, and worth the trouble. Until Google Play becomes more non-touch-device friendly, rooting MOJO is basically requisite to providing a good experience. Even then, however, I found incompatible apps, like Google+, for example. I was also prompted to update Google Play Services before most of the games that integrate with Play Games would work, but the Play Store showed no update. I ended up sideloading the apk from my Nexus 5 which corrected the issue, and I've been told by Mad Catz that they've been in contact with Google to get the Services compatibility issue sorted out as quickly as possible. 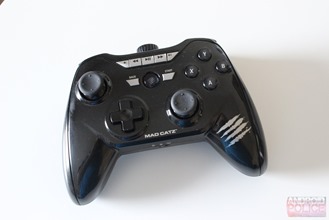 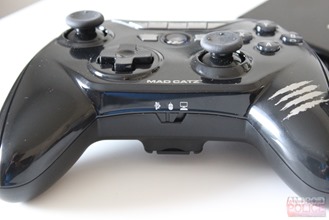 Overall, I have mixed feelings about MOJO right out of the gate. It's not what I expected, but at the same time I realize that I probably shouldn't have expected anything different. It's definitely rough around the edges right now, but it's a new product and a whole new realm for Mad Catz. I've talked with them fairly in-depth about this, and I can hear their excitement for the product, so I think it's going to get quite a bit better over time. GameStream is coming eventually, and hopefully NVIDIA will share its button mapping software with Mad Catz, as well. Those two things would make a world of difference.

It's worth keeping in mind here that I've only had the unit for a day, so these are just my initial assessments of the device. The full review should be up in a couple of weeks, where I'll go into much greater detail about what MOJO does well, as well as where it falls short. In the meantime, if there's anything you'd like to see in the full review, drop it in the comments.