You remember Everything.me, right? About a year ago it popped up in the Play Store as a homescreen replacement built around search. It aimed to deliver a smarter, context-based experience by generating suggestions using automatically generated themes and suggestions for apps and websites. The project even drew the attention of Mozilla and ultimately became the interface of Firefox OS. Today, Everything.me leaves beta and changes its name ever so slightly to EverythingMe. 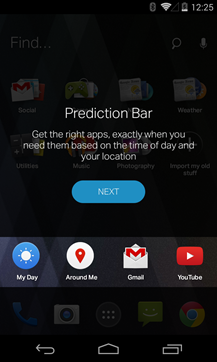 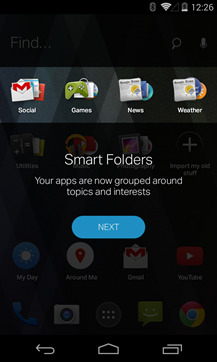 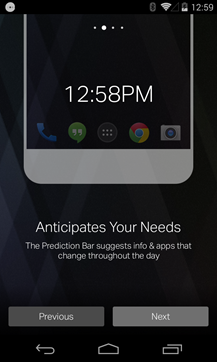 The latest version has significantly scaled back its reliance on search results in favor of "context" to customize the experience. What that amounts to is that EverythingMe adjusts what it shows to users based on things like the time of day, location, day of the week, calendar activities, interests, and just about any other information it can glean from your phone. It will even attempt to learn how apps are used and under what circumstances, which might mean showing weather and news apps in the morning and switching to messaging and movie apps in the evening. 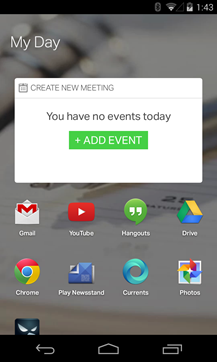 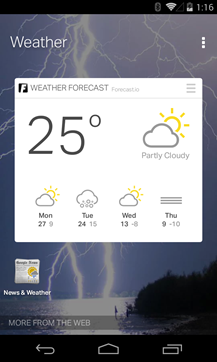 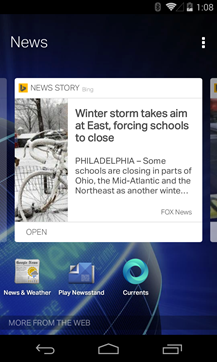 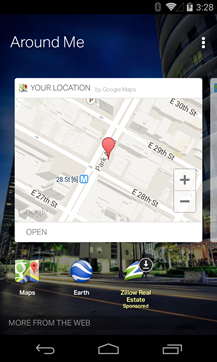 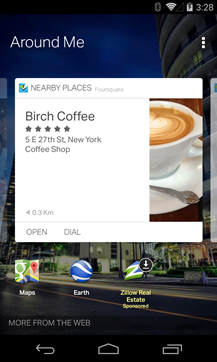 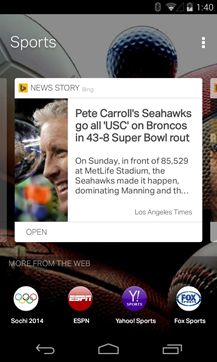 One of the top enhancements to the app is an evolution of its Smart Folders that finally make them legitimately useful. Some folders are now equipped with a card-style carousel with regularly updated pieces of information. The best example is Around Me, which starts with your location in Google Maps and allows you to flip through 5 recommendations for highly rated things nearby. The News and Sports folders feature top headlines, and Weather displays a simplified local 4-day forecast and the current conditions. This feature is only in a handful of Smart Folders, right now, but it seems like an obvious target for expansion.

Searches and Smart Folders still prominently display native apps wherever possible and fill about another screen’s worth of space with web links. However, there are often a couple of new featured recommendations that appear next to the native apps. Most of these are native apps that EverythingMe has added custom support for and knows how to link into with the right search criteria. The featured recommendations can also include some sponsored apps, but those are clearly marked and in no way deceptive. 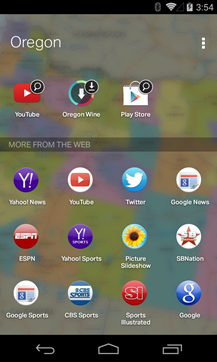 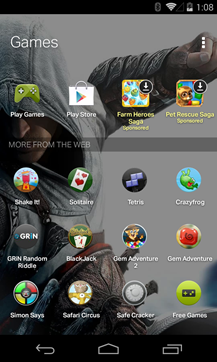 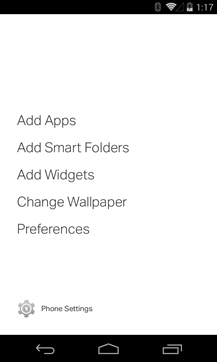 The whole experience is considerably more polished than the last time I tried Everything.me. Search results are faster, suggestions are better, features make more sense, and even the animations are pretty elegant. The stock Android launcher still makes up the base of EverythingMe, and the customizations are actually less intrusive than before. Most of the visual style from the launcher was left alone, but there are some elements that look like they were swiped directly from Windows Phone.

The original iteration of Everything.me felt more like a parlor trick, almost bordering on novelty. This updated version has found some legs and offers more utility to real people. It’s still probably not going to appeal to most of our readers, but it might be a good recommendation for friends that want to try something different. There is definitely potential for this to turn into more, but the hard part is going to be refining search results and improving the hooks into native apps.

Much like earlier versions, the list of required permissions is still pretty extensive. None of the permissions are particularly suspicious and they make sense given the features of the app, but I expect privacy-sensitive people won’t even consider it.

It looks like tablets are still not supported, but just about everything else should work fine. If you’re interested in trying EverythingMe for yourself, just hit the widget below.

First Look At Jumper Card, An Indiegogo Project That Looks To Put A Small Battery Pack And Sync ...