Update: Google says Now is coming to the beta channel this week, but it is already showing up for us on some machines.

Google Now is one of Android's central features these days, but we've known for a long time that Google was planning to bring it to Chrome on the desktop too. The feature first broke cover in the Chrome canary build, which is a standalone pre-dev version of the browser. Well, now it's on the regular dev channel, and it's enabled by default – no more mucking around with flags. 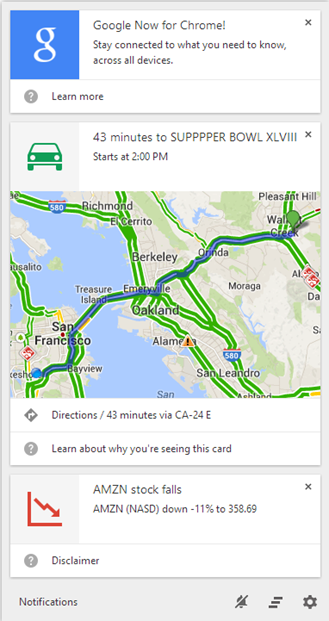 The notification icon in Chrome dev should now have all the same cards you get on your Android devices, assuming you are signed into Chrome. This is important because you no longer have to run a second version of Chrome just to see what Now is like. Anyone can move to the dev channel to check it out. You're likely to see some more bugs, but you also get all the latest and greatest features first.

Now that Google Now has hit the public dev channel, it shouldn't be long before it's in the beta channel. Then some time later it's going to show up in the stable release and Google will announce it like it's a completely new thing, but you know better, right?

Google Finally Opens Up The Chromecast To Developers With Release Of Google Cast SDK, Now Part ...