At this point, I've gone hands-on with several Blu phones, including the Life Play, Life View, Life Pro, Life Pure, and Vivo 4.8 HD, so I'm pretty familiar with what type of stuff they're putting out these days. I didn't think much about the Life One X (aside from the fact it's another One X phone and they'll probably get into some hot water over that), but after getting some hands-on time with the phone, I think this is my favorite Blu handset yet.

If you're not already familiar with Blu's One X, here's the gist: it's basically an upgrade to the Life One that brings a 1080p screen, faster processor, and 2GB of RAM to the existing form factor, along with a 32GB storage option. The cost is only marginally higher than its predecessor (I can't put an exact number here since the price fluctuates pretty regularly on Amazon), and still manages to keep it affordable by staying under the $300 mark. Here's a closer look at the specs: 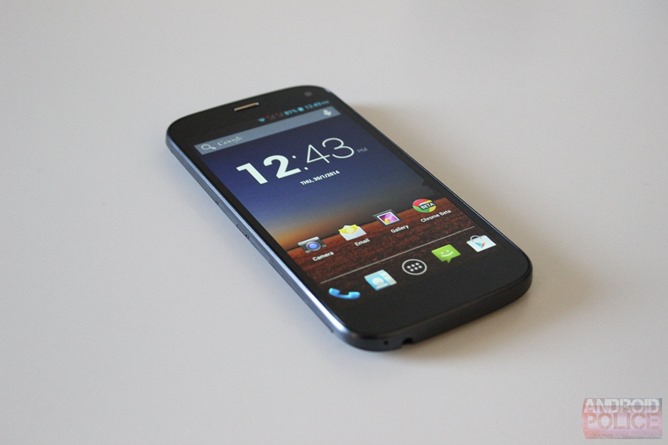 Aside from the differences internally, the LOX also sports a slightly different exterior. The overall design is very similar, but the dual SIM slots have been moved to the side of the device instead of beneath the back cover, as the cover is now one solid piece and no longer removable. The microUSB charging port is on the top of the device, the aforementioned SIM slots are on the left, power and volume are on the right, and 3.5mm headphone jack is on the bottom (!). The 13MP rear shooter with LED flash is on the upper left corner of the back, and the device's external speaker is located on the bottom-center of the back. Overall it has a nice button layout, and I'm personally a big fan of the bottom headphone jack. It just makes sense.

The fit and finish of this handset is probably better than any other Blu device I've used – it feels incredibly solid and well made. All the seams are flush, buttons aren't "squishy," and it just feels premium. The display is basically what I've come to expect from a Blu phone – quite good. Everything's very sharp on the device's five-inch 1080p screen (that's 440 PPI for those interested), and colors are vibrant without being oversaturated. I have no problem saying that this is probably the best display you'll see on a device at this price point. 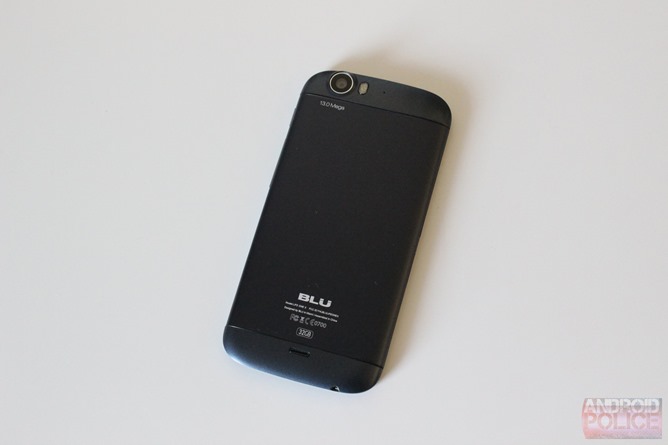 On the software side of things, the Life One X basically offers a stock (or nearly-stock) Android experience. The downside? It's stock Android 4.2.1. The company has already promised updates to KitKat, but I'd really like to see its newer handsets shipping with 4.4 at this point, as it's hard to say when an OTA may actually show up.

Of course, Blu threw a few of its own small tweaks into the otherwise-stock system, like the ability to show the battery percentage in the notification bar and a reboot option in the power menu, both features that most users have come to want. I'm still not sure why Google doesn't offer these as standard features in Android. 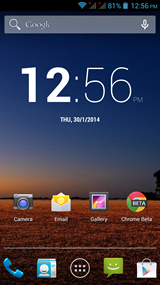 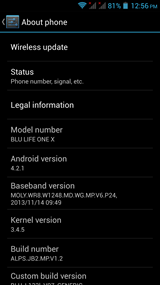 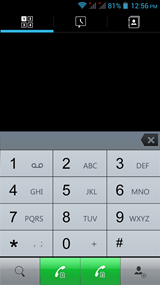 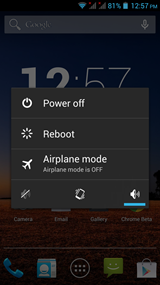 The phone app is also a little bit different, but mostly only aesthetically. The dialer is gray and green (instead of black and blue), but functionally it's essentially the same as the stock dialer from 4.0-4.3. There are also a few Blu-specific apps along for the ride, like a file manager, FM radio, NoteBook app, ToDo list, and SIM toolkit. So, not too much bloatware going on here.

On the cell side, the LOX is capable of HSPA+ 42 Mbps, but like other Blu phones, there's no LTE radio. That may be a dealbreaker for those who "require" LTE connectivity, but if you're OK with HSPA+, then it should be fine. I find that I get very reasonable HSPA speeds on AT&T; don't get me wrong, it's not LTE-fast, but for most everyday applications I don't really notice a difference between the two in the first place.

Overall, I really like the Blu Life One X and if something were to happen to my Nexus 5, I'd have no problem going to it as my daily driver (though I really wish it were running KitKat). With that said, the modding community has yet to really embrace Blu due to the fact that MediaTek hasn't yet released any source code for its chips, so custom ROMs aren't really possible. If you don't care about that sort of thing and are looking for a good device on the cheap, check out the Life One X. Latest Evernote For Android Beta Introduces Handwriting Support, Here's How To Join The ...