AllThingsD spinoff Re/code is reporting this morning that Google and Samsung have reached a series of "broad agreements" regarding the latter's modifications to the Android OS, and it may be music to the ears of Android enthusiasts everywhere.

According to an unnamed source (of course!), Google wasn't exactly happy with the direction the Korean OEM had been moving with the OS, particularly in the way it had been promoting its own content services on devices. The source claims that, as a part of the agreement, Samsung will scale back promotion of its content hubs in favor of promoting Google's own Play offerings. Additionally, the source claims Samsung will consider "dumping or altering" the new Magazine UX interface in future products. 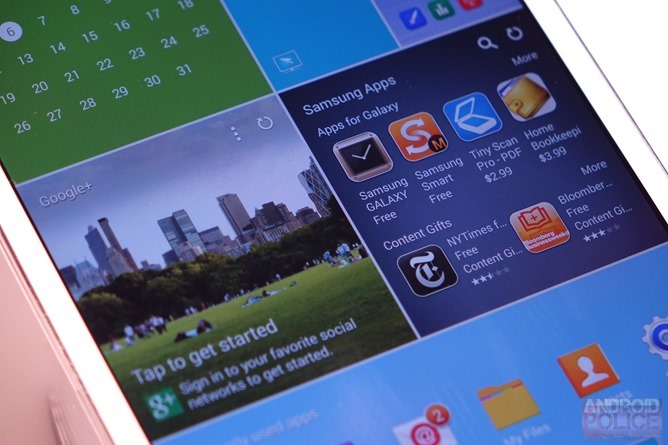 Magazine UX is easily Samsung's furthest departure from standard Android UI paradigms to date, and perhaps this has Google a bit worried. While Samsung is far from, say, Amazon in the extent to which it modifies the OS, there is a real possibility the world's largest shipper of smartphones by volume could "fork" Android without actually breaking any of Google's compatibility rules.

The greater the differences between using a Samsung smartphone and a Motorola smartphone become, it's plausible that users of the Samsung device will become less likely to jump ship to another OEM's handset. At the least, a consumer is likely to have a harder time making the switch - something that goes against principles of the Open Handset Alliance. In that open ecosystem, Samsung has rapidly ascended as the dominant subspecies of the greater Android population, so much that it would not be unreasonable to suggest that the company is defining the consumer Android experience more than Google is at this point. This presents a problem: Samsung's Android could become the Android if competing handset makers continue to be marginalized in the marketplace.

As such, the potential for Samsung to abuse this position of power only increases with its market share. Using software updates to disable certain 3rd party accessories, for example. Essentially, the more Samsung can do to lock consumers into its own vision of Android, the less attractive it becomes to other OEMs, and that presents a real problem for Google, as those manufacturers might start looking into competing ecosystems like Windows Phone. When OEMs start looking into other ecosystems, Play Store content channels could see revenue drop, and the overall attractiveness of the Play Store platform to consumers would be significantly reduced if it were limited to a single, or a very small few, OEM[s]. At that point, Samsung could potentially make the leap to a full-on forking and ditch Google altogether, though I still see that as a highly unlikely eventuality.

While details on the deals made are scant, Re/code's source indicated that there has been "a huge change, a sea change" in relations between Samsung and Google since the talks occurred earlier this month at CES. I guess we'll have to wait and see what comes of all this - maybe in the Galaxy S5 (or whatever it's called).