In case you've been living under a rock for the last month - or somewhere that isn't AMERICA, which for the purposes of American Football, is basically the same thing - the Super Bowl is coming up on Sunday. Surprisingly, the big game was and is one of the only major sporting events that just about everyone can access for free, both on over-the-air television and online (at least on desktop browsers). But that doesn't mean that the NFL won't try to use every other avenue to wring money out of MetLife Stadium like beer out of a tavern sponge.

Case in point: the hasty and almost completely useless Super Bowl XLVIII Game Program app. These sort of things are pretty flaky even when you buy them at a live venue, but as a paid app for a device which already has access to the Internet, it's downright embarrassing. Calling this thing an app is kind of an overstatement - it's a game magazine, paginated and rigidly formatted, with a few whiz-bang animations thrown in. And for all that, they couldn't even get the formatting right: check out those 4:3 screenshots. Someone thought it wasn't worth making this app look decent on Android phones and tablets after developing primarily for the iPad. 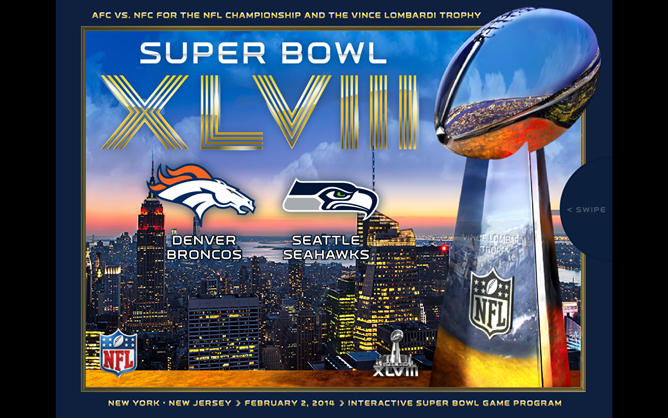 Not pictured: MetLife Stadium. Like everyone else, the NFL seems loath to admit it's in New Jersey.

What's inside is your typical game day fluff: statistics, season wrapups, scouting reports, retrospective stories you don't care about, and a few pages have some very basic animation. There is a ton of information in this thing, I'll give them that. The problem is that all of it is information you can bring up in literally seconds via a Google search, and getting it that way won't fill your screen with ads for the Xbox One and pickup trucks.

LOOK AT ALL THE FOOTBALL I'M NOT WATCHING

Yeah, there are ads, full-page video interstitials right there in the middle of your content. There's nothing wrong with advertising - take a look around this page if you don't believe me - but most people who aren't magazine publishers, movie studios, or cable networks don't make you pay to watch them.

So there you have it: a poorly designed, poorly formatted, poorly implemented digital magazine for "enhancing" your game day experience. If you actually care about the Broncos or Seahawks, you know most of this stuff already, and if you don't, you should save your three bucks for an extra bag of Tostitos on game day. See you next year, NFL - please consider taking the mobile streaming license away from Verizon. HTC One Android 4.4.2 Update Is Now Rolling Out In Several European Countries