Samsung is slowly but surely sending its Android 4.4.2 update out to more and more regions and variants of the Galaxy Note 3. This morning SamMobile reports that both the LTE Snapdragon (SM-N9005) and the 3G Exynos (SM-N900) versions of the Note 3 are being updated over-the-air on networks in India, South Korea, and Switzerland. As usual, the rollout is staged, but users in these countries can try a manual update check via the Settings menu. 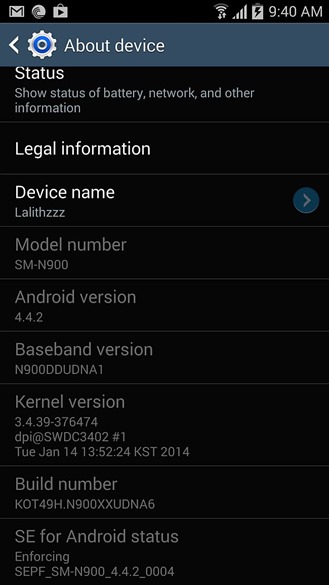 Both SamMobile and the Samsung Updates archive have also posted SM-N9005 update files for even more regions: Italy (Vodafone), Slovenia (Si.mobil), Bulgaria (MTL), Spain (Vodafone), and the general "Baltic" area, though there are no reports of over-the-air updates being sent out to these countries. Keep in mind that these repositories aren't official Samsung downloads, though they tend to be pretty reliable for impatient users. (If you're in one of those countries, be sure and check that your cell phone provider matches the build before trying to flash it manually.)

The 4.4.2 update is weighing in at roughly 380MB, and includes visual tweaks and small user interface changes to TouchWiz in addition to the underlying KitKat additions. None of the various American models of the Galaxy Note 3 have been updated, and they probably won't be for some time, since US carriers tend to take a somewhat unhurried approach to timely software upgrades. Even so, Samsung is moving uncharacteristically fast with the 4.4 update, so maybe we'll see it stateside sooner rather than later.