To celebrate the beginning of the pro cycling season (starting with the Tour Down Under in Australia) Recon, maker of HUD devices for athletes, is offering $100 off any of its HUD offerings.

Readers may remember Recon for Jet, the heads-up glasses that run Jelly Bean and compete against the still nascent Google Glass for the hearts and minds of athletes. The glasses debuted last Spring, with "Pilot Edition" units going up for pre-order last June. The current batch of Jet headsets is currently on a first-come, first-serve basis with units expected to ship out in "Spring," though no specific time frame is offered by the company's website.

The company also offers a range of HUD products geared toward snow enthusiasts, with "Recon Ready" goggles and MOD Live displays that give you instant performance stats, navigation, and a host of other awesome features beamed directly to your eyeball.

Customers can get any of these products for a cool $100 off with a promo code - just type in DOWNUNDER100 during the checkout process. That brings the Jet down to a slightly more manageable $499, while the MOD Live bundle will run you $349.

An email regarding the promo sent out to those on Recon's lists also announces version 2.0 of the company's SDK and a new web API available here. 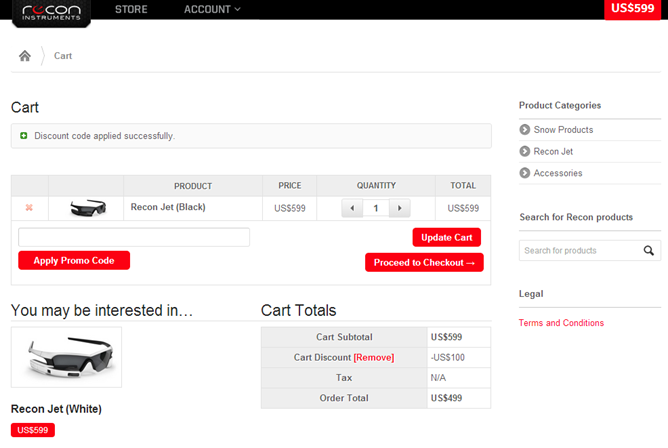 Those interested should waste no time in placing their order, as the deal - like the Tour Down Under - ends this Sunday, January 26th, and the Jet is still being released in limited quantities. The company's latest SNOW 2 goggles are sold out at the time of writing. To reserve your HUD at a discount, just hit the link below.

Qualcomm Picks Up Giant Cache Of Palm, IPAQ, And Bitfone Patents From HP