Don't expect an experience even remotely comparable to that displayed in the video above, though. Atheer One will overlay a 26-inch Android tablet UI 50 centimeters from your face, which you can interact with in mid-air as you would a regular tablet (assuming you owned a flying tablet). The default lenses are transparent, with the tablet UI floating on top of the world around you. Yet if you would rather space out entirely, the developers plan to offer opaque lenses that would allow you to focus entirely on the application at hand.

This all sounds cool (more in a neato than a practical sense), but if you're interested in getting a pair to avoid the geek factor that comes with walking around in a pair of Glass, think again. Atheer One plugs into your phone's micro USB port. With a cord that long hanging from them, you won't be able to so much as point at eyeglass croakies without acknowledging that the wearer is more fashionable than you are. Though, when paired with a Bluetooth controller, the glasses could at least still allow for a great deal of fun in the privacy of your own bedroom.

There are ten days left to contribute to this project. Atheer Labs has currently raised more than the $100,000 it asked for, but you can still get your hands on a pair for $450 or a developer kit for $850. At that price, you could get both for the cost of a single pair of Glass, assuming you're willing to gamble on an unfinished product (not that Google's glasses are, well, consumer-ready yet themselves). Kits are scheduled to go out in June, while the glasses are promised to follow six months later. 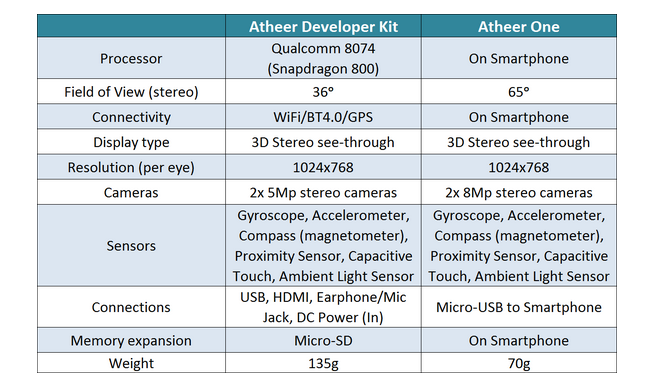 If Atheer Labs can deliver on its promise, soon Tom Cruise won't be the only one flicking away virtual screens filled with information he no longer has any use for. That's a big "if," though. Where's a precog when you need one?

Atheer One: What it feels like to have superpowers!