We've talked about Testdroid a few times here at AP. There's a good reason for that: it simplifies developers' lives and essentially automates the testing process by running their application or game on over 280 real Android devices (so it's not a virtualized environment). While the service itself aims to make devs' lives easier, Testdroid realized that the pay-as-you-go payment option simply wasn't working for most users. Why? Because problems happen. Paying by the hour for application testing isn't the most economical way of doing things, because if something goes awry, the developer ends up paying more than the originally quoted price to test and re-test. That's never a good thing.

To remedy this, Testdroid decided to completely restructure its pricing with three new unlimited plans for Testdroid Cloud. Basically these new options allow developers to run and re-run tests as many times as needed to work out all the kinks in their applications or games. Instead of being charged hourly, the new plans are based on monthly use. 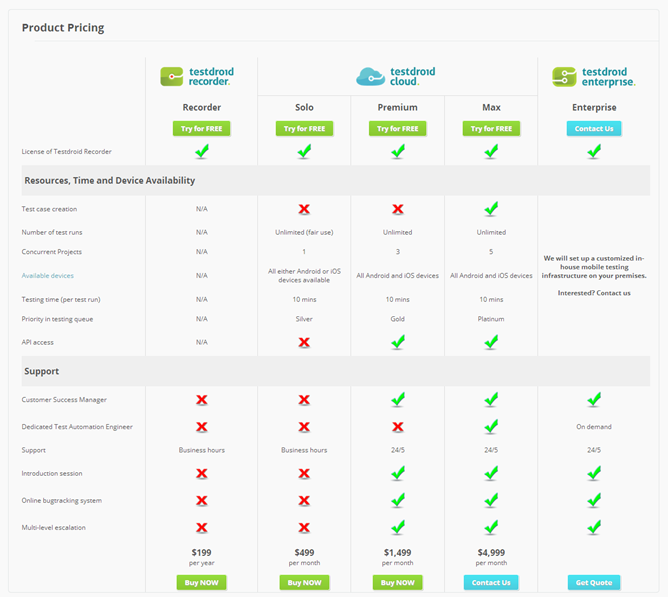 As seen in the above list, the three options – Solo, Premium, and Max – offer various options depending on what exactly the developer needs. The base option, Solo, is quickly becoming one of Testdroid's most popular – at $500 a month, it's the most affordable while still offering an unlimited number of scans. For small developers, this is probably the way to go, especially for those who will only need to run one project at a time.

Of course, larger developers may need more than what the Solo option has to offer. That's where Premium and Max come into play. For $1500 and $5000 respectively, these plans bring quite a bit more to the table, including support for up to five simultaneous projects, testing on both Android and iOS devices (the Solo plan is either/or), and increased priority in the testing queue. Pair all that with better support, and you can see why these options are more appropriate for larger development firms. Some of the biggest names in Android already trust Testdroid with their application and/or game testing, including Rovio, Cisco, SwiftKey, PayPal, eBay, and many more.

Something else worth noting about all of these plans is that they include Testdroid Recorder, which records actions on the object level and captures screenshots throughout the duration of the tests, at no additional cost. This allows developers to see exactly what their application looks like on each of the 280+ devices, as well as better pinpoint potential issues as they happen.

There's no doubt that Testdroid is changing the way developers think about application testing. For more information on Testdroid Cloud, the devices used for testing, information about the company, or just to jump right into testing your application or game, head here.