Wow - Google just decided to drop a [small] bomb on us this morning, a la the Google Play Edition Moto G, available immediately on the US Play Store website. 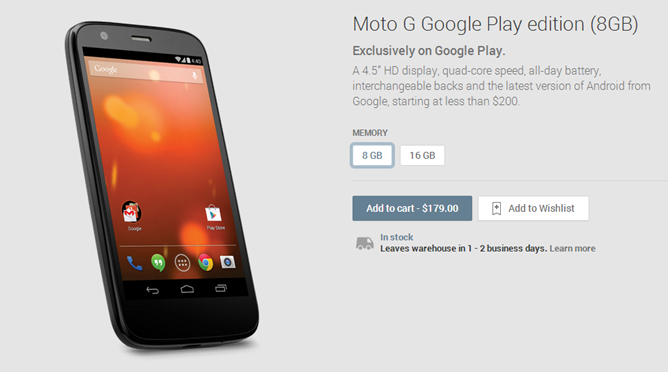 The 8GB model will cost the same $179 that it does at 3rd party retailers for the Motorola version, and the 16GB edition is a mere $20 more, at $199. We definitely didn't see that one coming today!

The device features the same Qualcomm Snapdragon 400 1.2GHz quad-core processor, quad-band HSPA+ connectivity, and 4.5" 720p display as it was originally unveiled with. The only difference, of course, is that it is running 100% stock Android 4.4, not that Motorola's own software strays too far from that experience to begin with. Head over to Google Play to grab one now.