Welcome to the latest entry in our Bonus Round series, wherein we tell you all about the new Android games of the day that we couldn't get to during our regular news rounds. Consider this a quick update for the dedicated gamers who can't wait for our bi-weekly roundups, and don't want to wade through a whole day's worth of news just to get their pixelated fix. Today we've got an impressive Castlevania-style sidescroller, a destruction physics game, and a Rube Goldberg puzzler. Without further ado:

If you're in the mood for a little Castlevania nostalgia, then Magic Rampage is happy to oblige you. This side-scrolling action/RPG hybrid uses familiar platforming and battle elements, and anyone who's ever taken down Ridley or Dracula in 16 glorious bits will feel right at home. It's also got some pretty respectable pixel art, a few physics elements, and a collection of costumes/characters to keep you happy.

From the creators of Magic Portals, Magic Rampage is an addictive platformer that combines the action-RPG genre with hack 'n' slash gameplay! A tribute to the "Metroidvania" style!

Mix Angry Birds and a bridge building simulator, and you'll get something like Demolition Duke. (After all, watching those digital bridges break was the most fun part of physics class, right?) You'll use explosives on various crucial points to blow these matchstick buildings, or in some cases, strategically accomplish some interesting tasks. Watch out for falling timber and the usual currency-based in-app purchases.

Demolition Duke invites players to his playground of destruction. In a cartoony 3D world they can try out all of his explosive toys. Players can use them to destroy expertly crafted constructions or they can try to place them carefully to complete various tasks which are waiting for them. 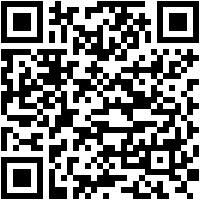 If you haven't heard of Rube Goldberg, then read up: he's the father of all those intricate and overly complicated physics machines you've seen in movies and cartoons. This game follows the same ideas, tasking you with creating ridiculously complex Mouse Trap-style machines to accomplish simple tasks. Rube Works features some decent 3D graphics and is produced by Goldberg's actual descendants, though how much they actually contributed to the game itself isn't clear.

The first and only official Rube Goldberg puzzle game. Solve everyday problems in Rube’s trademark elaborate style by creating complex and hilarious machines. Is pouring a glass of juice just too straightforward and boring? Try using a jack-in-the-box, magnifying glass, string and a cymbal-wielding friend to achieve your goal. The more creative your solution the better! 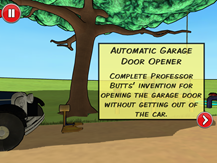 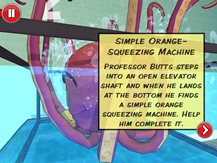 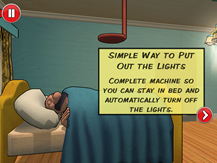