The reviews for apps on the Play Store are important, not just for potential users, but for developers and publishers as well: scores during the first few weeks of availability can make or break a new service or game. This being the case, it's disheartening to see a new trend among Play Store reviews: attention-seeking reviewers that give an app one star just so that their review will show up higher on the app's page.

The AppWared blog spotted this trend, which seems to be limited to Turkish users (at least for the moment). On the Turkish page for Where's My Water 2, AppWared found that the top 15 reviews scored the game one star... 11 of which were actually positive. Tülay Sahillioglu writes: "Good, a very good game! I gave 1 star so that my comment gets seen." Volcano Uysal says, "Very good would recommend the beautiful game," despite the one star review. 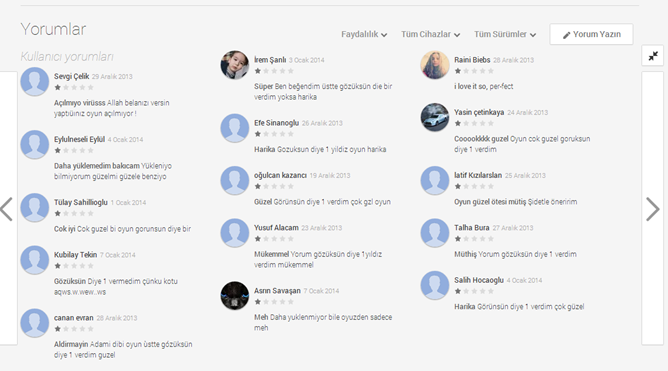 These users are exploiting a weakness in the default layout of the web version of the Play Store, which displays the first app reviews according to "Helpfulness." It looks like a score that contrasts with the majority is given much better visibility - Where's My Water 2 has an overall rating of 4.1 stars, with the vast majority of players rating the game five stars out of five. You can also view reviews by time or rating, but casual browsers will get a very strange impression of a four star game with a disproportionate number of one star reviews.

Why are these jerks doing this? Apparently it's just the pure, narcissistic thrill of seeing their reviews on top of thousands in the Play Store. It's the same kind of impulse that makes idiots scream "FIRST!" in any comment section, but in this case, the trend has the potential to be very damaging. Disney and Where's My Water 2 aren't going to be hurt much after more than 200,000 app ratings and reviews. But a new app from a smaller developer could have its Play Store rating crippled by a few users who stupidly felt the need to boost the visibility of their comments by lowering the overall score.

Unfortunately, I doubt that there's an easy fix for this kind of behavior. Developers and other users can flag these low-star, high-praise reviews as spam - and that's what they are, useless filler content that's selling a feeling rather than a product. Other than that, we'll just have to hope that the trend stays small. AppWared doesn't show any other app listings with this kind of behavior, though our Turkish-speaking readers may be able to find more.

It should go without saying, but just to cover all our bases: don't be a jackass. Review apps honestly and consistently, and don't lower the score just to up your own visibility. It's a dick move.

Beats Throws Its Name Into The Streaming Music Arena, Will Launch Beats Music On January 21st ...