The Moto G was already an affordable handset when the GSM version became available in the US for just $179.99 early last month. Then a Verizon version appeared in some Best Buy stores for $80 less. Now the carrier is officially launching the Moto G for the same low price, selling it both online and in its stores for just $99.99. 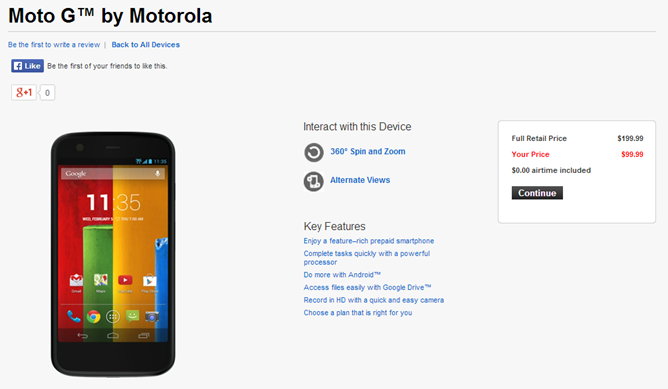 Today was and remained Verizon's intended launch date, but the carrier permitted Best Buy to start selling stock as soon as it arrived, giving some customers somewhat of a head start. Nevertheless, this is the same product. It has a 1.2GHz Qualcomm Snapdragon 400 processor, 1GB of RAM, 8GB of internal storage, a 4.5-inch 1280 x 720 display, a 5MP rear-facing camera, and a 1.3MP camera on the front. After ordering the handset, you simply select one of two prepaid plans, which start at $60 a month for unlimited talk/text with 2GB of data.

Keep in mind, the Moto G does not have an LTE radio, so you will be stuck with 3G speeds. And don't think of using this device as a cheap means of upgrading your postpaid contract device, as you will have to activate and use it with a prepaid plan for at least six months before you can switch. Still, this phone clearly bests Verizon's other prepaid phones: the LG Optimus Exceed, the Optimus Zone, and the Samsung Galaxy Legend. If you intend to use it purely as an off-contract device and are comfortable with the data speeds, then by all means, hit up the link below.

Samsung Executive Tells Bloomberg The Galaxy S5 And A New Galaxy Gear Will Arrive By April, ...

Gmail Cuddles Up A Little Closer To Google+, Website Now Suggests People In Your Circles When ...