Is that an Android phone tailgating you? No, that's just the operating system in your rear view mirror. Robin Labs, which previously made headlines with its Yahoo-optimized voice assistant, is at CES with Pioneer to show off a new smart rear view mirror called the Drive Agent Mirror. It runs Android with Robin's natural language voice recognition system built-in. Yes, it's probably as strange as it sounds. 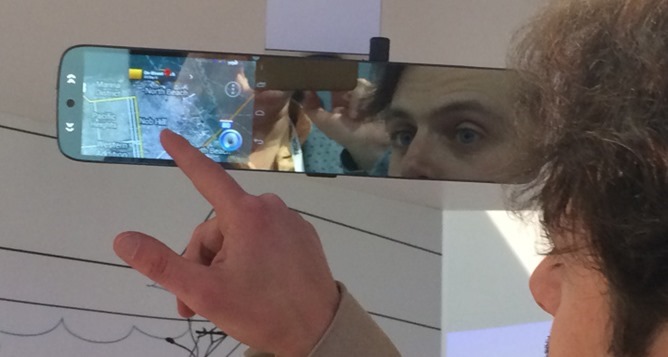 The mirror is a little wider than average, but it looks otherwise normal when the display is off. When the embedded Android system is online, the left third of the mirror lights up with a semi-transparent display. You can still see reflections in it, but the interface is also visible. The display is a touchscreen, but the main mode of interaction is intended to be voice, and that's where Robin Labs comes in. The customized menus can be navigated by voice with Robin Labs' technology so you keep your hands on the wheel.

The Android-powered mirror is intended for tasks like navigation, messaging, and entertainment. Pioneer thinks having all that in the mirror will be less distracting than mounting a phone to your dashboard. Although, it places the road more outside your field of vision when you stare at it. The mirror is part of Pioneer's line of Networked Entertainment Experience devices. It's unclear if the Drive Agent Mirror will come as an option in your next car.

Facebook Decides To End Sponsored Stories, Will Invent Other Ways To Creep You Out Later