Nokia's rumored Android phone, the Normandy, has popped up a few times in leaked pics, but we've never seen the UI until now. In the newest images, the Android interface designed by Nokia is on display for all to see.

The lock screen has a rather Windows Phone vibe with large offset text and notification panels down at the bottom. There are also screens from the Skype and Viber apps. Notably, the status bar shows two separate SIM cards with their own signal bars. There are no virtual buttons on the Normandy, which is a little odd considering the single hardware button. The Normandy might be completely changing the way Android works to match Nokia's feature phone aesthetic. 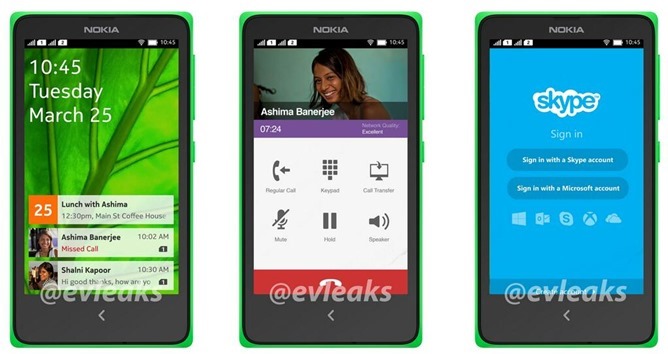 Even with Microsoft set to acquire Nokia's Devices and Services division, it looks like the Normandy might still happen. By all accounts, it looks like a low-end dual-SIM phone with Android. It's not likely to be competitive with Nokia's Windows Phone products – it might not even come to the US.

[CES 2014] Hisense Blurs The Line Between Phone And Tablet With The Massive 6.8-Inch X1