One of the cooler things that went a bit unnoticed at this years CES was, without a doubt, Sony's all-new XSP-N1BT automotive stereo head unit. No, it's not exactly the most exciting name in the world, but Android enthusiasts may be snatching up this double DIN unit with great enthusiasm when it arrives in May for $250 for one reason: in consort with Sony's control app, it turns your Android smartphone into a touchscreen control unit for your car stereo. 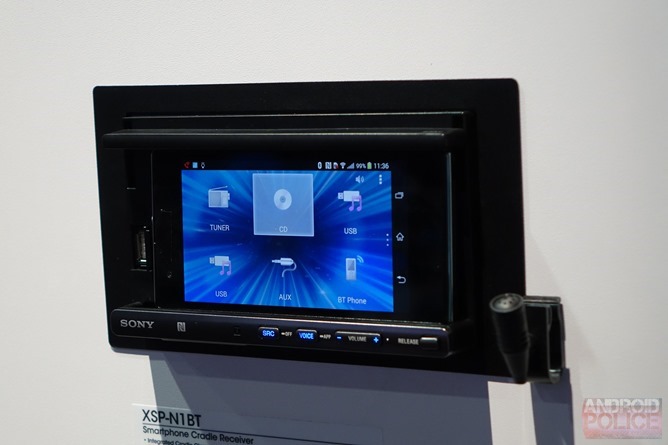 The XPS-N1BT, as you may have guessed, does this via a Bluetooth connection, though initial pairing is accomplished quickly and easily via NFC. All commands and audio from your smartphone are sent over Bluetooth, though your smartphone is able to control the stereo's local playback functionality, as well, through the Sony app that will be available on the Play Store. Of course, you're not limited to Sony's app for simple audio playback - any app that streams audio over Bluetooth (eg, Google Play Music, Spotify) will work, just like any other Bluetooth-enabled car stereo.

The head unit will be compatible with most Android phones via the app (which will be on the Play Store), though if your device is substantially larger than the Xperia Z1 it may not physically fit in the clamp mechanism, so Note 3 and Z Ultra owners probably shouldn't be preordering just yet. That said, the docking action isn't required to control the stereo, it simply makes using the Sony control app's interface easier (and less dangerous on the road).

The Xperia Z, Z1, and Z Compact (Z1F) will all be able to dock directly into a charging port on the stereo as well, using the side-mounted magnetic charging port those devices are all equipped with. Non-Xperia devices can charge via the external USB port on the head unit, which delivers up to 1.5 amps of charging power. 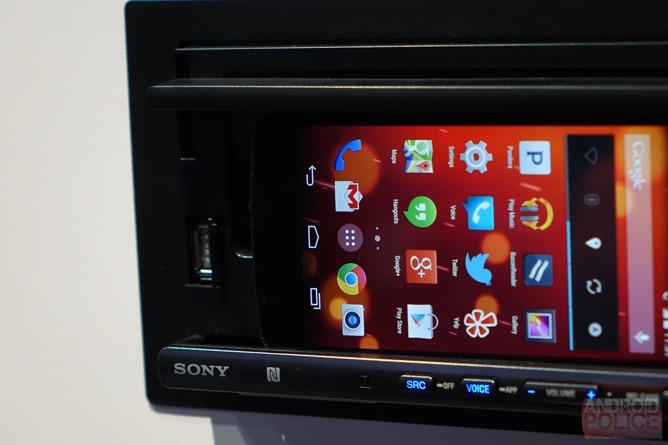 The stereo has a standard LCD face when your phone isn't docked in it, as well as a CD player, auxiliary input, and a rear USB input that can be routed to another location in your car, like the glovebox. There's also a microphone, routed through the rear of the unit, that you can then mount on your dash for voice commands and phone calls. Without the phone, the stereo is a fully functional, if odd-looking, head unit, and features most of the goodies you'd expect of Sony's high-end automotive stereos.