When it comes to big things happening at CES, Fuhu isn't really the first name that comes to mind. Understandably so, as it's a small, niche company. But don't sell it short, either – these guys have been hard at work and have some great-looking products set for release in 2014.

We spent some time in the Fuhu suite yesterday here at CES in Las Vegas, where company representatives walked us through some of the upcoming products and accessories that we can expect to see later this year. The flagship device is, of course, the recently-announced DreamTab Dreamworks-branded tablet, which brings a whole new UI (called Blue Morpho) and builds on what started with the nabi line. The most interesting aspect of the DreamTab, however, is that there will be several models available, including an eight-inch model, 12 incher, and even larger 19- and 24-inch models. There were even working prototypes of the latter two on-site for us to play with, though the company couldn't confirm (nor deny) that these models will actually make it to retail in these sizes (though the chances are very high that we'll see at least one super large DreamTab). 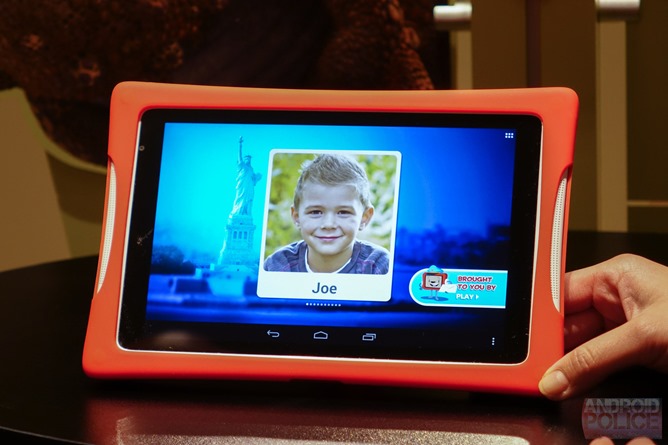 On the spec side, the reference DreamTab (the eight-inch model) is running an Intel Atom chip, has a 1080p IPS display, and is based on Android 4.4, though other specs weren't given. This isn't an uncommon practice for Fuhu, since their devices aren't generally designed for the "tech geeks" out there, and it's more about the experience for kids. 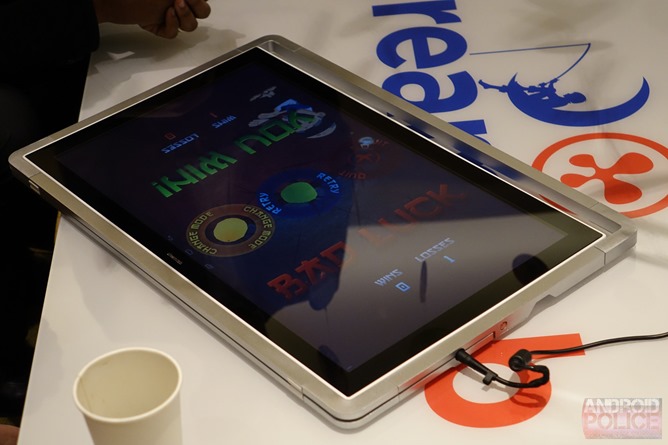 Speaking of, the new interface – which Fuhu calls Blue Morpho – basically takes what the company started with Monarch UI on the nabi tablets and builds on it. It's definitely familiar for anyone who has used a nabi, but it's also fresh and new. It's far more integrated and advanced than Monarch, and showcases Fuhu's content designed specifically for the DreamTab. Everything from the login screen to homescreens has a new and clean feel to it, and it all seems to be very well thought-out. Fuhu claims that Blue Morpho brings over 200 new features over previous versions of the company's software. I was told that this new UI would also be coming to existing nabi tablets, so owners of the current generation should eventually be able to enjoy most of the key features the DreamTab has to offer.

The DreamTab isn't all Fuhu has been working on for 2014, either. The nabi line is going to see a refresh for the first time, which includes the new nabi S lineup. This is basically a colorful new take on the nabi Jr., nabi 2, and nabi XD that will include Blue Morpho out of the box and offers end-users a focus on additional hardware support. The company plans to introduce a new service and support program for the nabi S line (hence the S), but we'll have to wait until closer to release time to get more details on that.

Aside from new devices, Fuhu is also working on a slew of new accessories for 2014, including the nabi Cam, a nabi Jr.-based baby monitor; nabi Karaoke, a Bluetooth speaker system that doubles as a karaoke machine; a nabi-branded 4G LTE Mi-Fi, NFC and Bluetooth security tags for nabi devices, and a Miracast dongle to bring a second-screen experience to nabi owners.

Speaking of, the company showed off some of the things they're doing with educational software and the second screen – wow. They already have nearly 10,000 completed video lessons that work in conjunction with the Wings software that comes pre-installed on nabi devices. We spent a little bit of time checking this out, and it's really neat stuff – basically, it's like giving the child a one-on-one tutor to help them better learn and understand a variety of topics. The video lesson is played on the TV, where a virtual teacher (a real person) asks questions. The answer is then inputted into the nabi, and at the end of each lesson the instructor goes over the results. It's very cool.

All-in-all, I think this is going to be a pretty big year for Fuhu. The majority of the products we looked at are due out in Spring of this year, but as always we'll let you know as more information becomes available.