We just got back from a meeting at ASUS's CES suite, and we had a chance to go hands-on with the full portfolio of the company's new Android products (apart from Padfone X, which sadly sat walled off in a glass case). Of great interest to some of you, no doubt, are the company's new ZenFone handsets. Johnny Shih, ASUS's enthusiastic chairman, announced the ZenFone 4, 5, and 6, would be priced at $99, $149, and $199, respectively. With all three phones utilizing dual-core Intel Ivy Trail+ chipsets and powered by Android 4.3, that's certainly an attractive proposition. Were there any immediately apparent downsides, though? 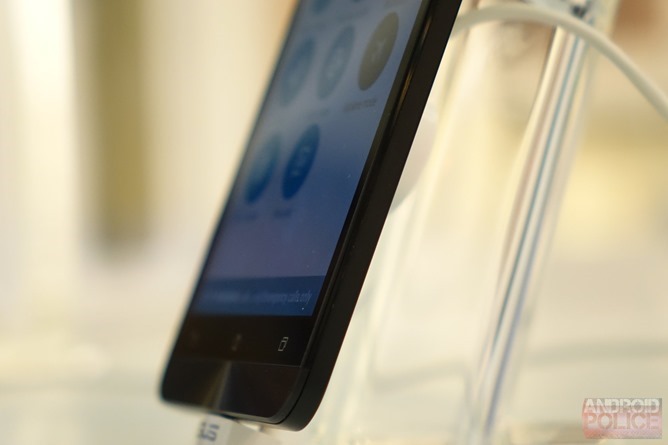 In the time Cameron and I spent with the phones, the answer seemed to be a pretty resounding "no." While the plastic rear casing is far from the most premium of materials you'll find phones made out of these days, it doesn't feel particularly cheap, and the design of the new ZenFones is actually pretty nice, if you're asking me. The simple aesthetics are contrasted nicely by ASUS's newly-minted Zen UI, which uses a lot of flat shapes and bright colors over white backgrounds (yes, it's a bit iOS-y), as compared to the largely-stock UI ASUS's phones have used to date.

Check out our hands-on video, narrated by Cameron Summerson, below:

Note: there is an erroneous statement in this video that the ZenFone 4 has a single-core processor, it actually has a dual-core.

The Intel chips in these phones don't fly along like a Nexus 5, by any means, but they did seem perfectly smooth in the basic tasks we used them for while playing with the phones. The ZenFone 5 & 6 share the same 2GHz Intel Atom dual-core processor, while the $99 ZenFone 4 has a downclocked 1.2GHz dual-core Atom. That said, the ZenFone 4 didn't feel sluggish, though it should be noted that its 840x400 display is a significant step down from the 720p panels on the 5 and 6, both visually and in terms of processor load.

Overall, these phones actually seem pretty nice. However, despite the announcement of pricing in US dollars, ASUS would not comment on whether the phones would actually see availability here in the states. The reason for announcing pricing in dollars given was that it was "easier to convert" for countries with various currencies in Asia, which remains ASUS's #1 market.

The ZenFone 6 will be the only model available with 2GB of RAM out of the three handsets, though buyers will have to opt for the 16GB model in order to get the additional RAM, meaning a price something above the $200 the 8GB version will cost you. Aside from a few specification differences, though, these phones are all remarkably similar, and as such, deliver very similar experiences.

Again, there were no announcements regarding a release date for any of these devices, so we're not sure exactly when or where we'll be seeing the ZenFone trio pop up. ASUS's reputation in the smartphone market also remains largely untested outside of Asian markets, so it's hard to say just how these devices will stack up against budget handsets from other OEMs. But from what we've seen so far, these phones really do seem to impress for the price, and I was genuinely surprised that they really do plan on selling them so cheaply. Hopefully we'll have a chance to see how the new ZenFones do under a longer evaluation at some point in the future.