If you're a regular user of almost any social network, you probably know how powerful crowdsourcing questions and answers can be. That's the basis behind a new search engine dubbed Jelly, created by Ben Finkel and Biz Stone, one of the co-founders of Twitter. Jelly is a social network for question-and-answer style interactions with friends you've already made connections with on Twitter and Facebook. Instead of going to traditional search engines, users are encouraged to snap a picture and post a question, which can then be answered or forwarded to others who might be able to help.

Jelly is very focused on the use of photos to steer answers in the right direction, so much so that there doesn't appear to be a way to ask questions without one. However, you can also use images from your gallery or a Google Image Search. Once a picture is selected, it can be cropped down and drawn on to give a little more context. A few words to explain the query and it's ready to post.

Facebook and Twitter are used to construct a network of people who will see your questions. Your followers, and their followers, can see what you're asking and offer their answers. If one of those people feels like they might know somebody more equipped to answer the question, they can further forward it their friends. Your Facebook and Twitter profiles are mostly used as a sign-in mechanism and for your social connections, but questions can also be shared through them to elicit responses from people who aren't on Jelly. 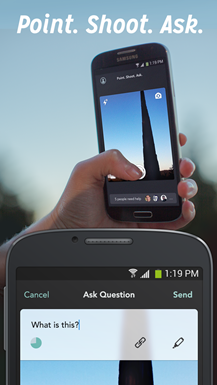 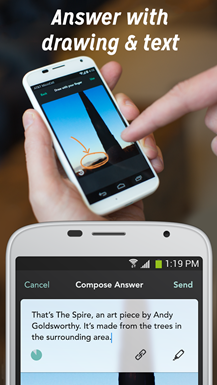 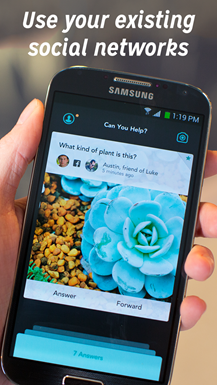 The app still feels a bit unfinished and definitely suffers from some bugs. It crashed several times while I was experimenting with it, especially when picking photos from the gallery. Despite being so photo-oriented, it also isn't set up to receive images via the share intent from other apps. Most of the issues will surely be ironed out quickly through updates, but they might make for a rocky launch.

If you're eager to get your Q&A on, hit the widget below to give Jelly a try!