Just about a year ago we reported that the popular multi-platform retro gaming emulator RetroArch had been published to the Play Store. Apparently Google took exception to this, as they've done with a seemingly random assortment of game emulators - some have been viciously torn out of the Play Store, some have been left alone, and Google isn't talking about why it picks one over the other. In any case, RetroArch is back, at least for the moment.

RetroArch is multi-platform in every sense of the word - the open-source emulator itself has versions available for Windows, OSX, Linux, jailbroken iOS, Raspberry Pi, and even game consoles from the original Xbox to the Nintendo Wii. It also supports multiple types of game ROMs, including the NES, SNES, Game Boy, GBC, GBA, Master System, Genesis, Sega CD, Game Gear, Virtual Boy, PC Engine, Neo Geo Pocket Color, Wonderswan, and the original PlayStation. This is one of the most versatile emulators available on any platform, though you might get better results from a program designed to emulate a single system. 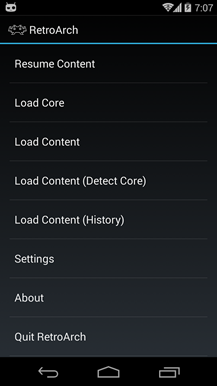 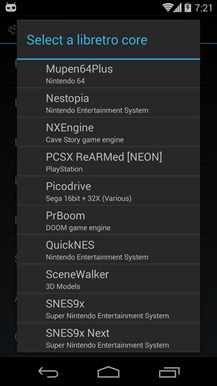 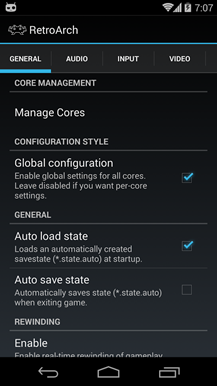 It looks like the new version doesn't have much in the way of expanded features (not that something this complex really needs them), but developer Libretro has implemented a few changes that will hopefully keep the app from being pulled. First, users now have the option to only enable processor cores that use GPL standards, achieved via a pop-up on first run. You can get access to this choice again by wiping the app's data. Second, the logo and Play Store screenshots have been altered to remove any possibility of copyright infringement.

Google didn't tell Libretro why the app was pulled before, so there's no way to know if the emulator will be sticking around. You can download it for free on Android devices running 2.3 or higher. RetroArch is free with no ads or in-app purchases, but you'll need to supply your own game files. RetroArch is also available as a sideload APK on the developer's website.