Vizio's pulled the curtains off two new Portable Smart Audio speakers that are powered by Android 4.4. What makes them special are the touchscreens embedded into the front of each device. Instead of having to pair them with a phone using Bluetooth, users will be free to stream music directly from the likes of Spotify and Pandora or enjoy video from Netflix or YouTube. Think of each version as a bulky tablet that doesn't need to rest in your lap, one with speakers that you won't leave you reaching for earbuds.

The Portable Smart Audio line doesn't have the most memorable name, but consumers will have two options to pick from once these land on store shelves. The first, smaller option has a 4.7-inch screen and is roughly eleven inches in length. The larger version has a 7-inch screen and is six inches longer overall. The screen resolution is essentially the same for both, 1280x720 versus 1280x800. 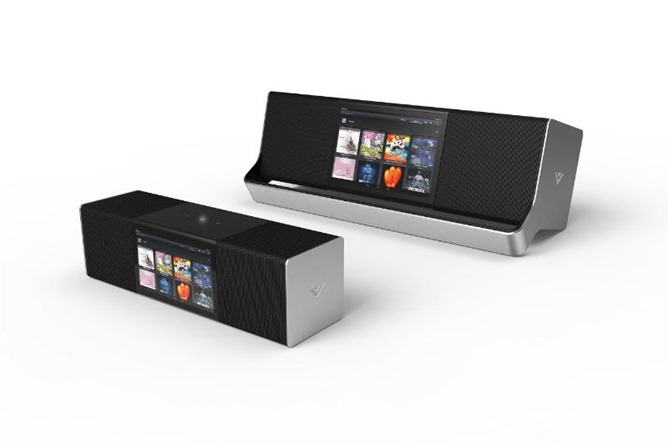 Both speakers come with local storage, Bluetooth support, and USB connectivity, so you won't have to rely on cloud services if you don't want to. You don't even have to stream media at all to get use out of the hardware. There's a mic included in each, so you can use the boxes for Skype chats or Google Hangouts instead.

The Portable Smart Audio line isn't due out until the second half of this year, so certain details haven't been set in stone. We don't yet know what storage sizes will be available or how much the speakers will eventually sell for. But in the meantime, you can get more information by checking out the snazzy source links below. [CES 2014] LG Confirms That The G Flex Is Headed For AT&T, T-Mobile, And Sprint Later This Year