Update: Best Buy has reached out to us to confirm that the $99.99 no-contract Verizon Moto G will go on sale as shipments arrive at the retailer's stores, which will apparently be as soon as today for some locations. If you're looking to get in on this $99 deal, it may be worth giving your local Best Buy a call to see if they have any in stock. Online availability will follow at a later date.

Verizon has already confirmed that they'll be carrying the low-priced Moto G in some capacity in early 2014, but according to a tipster's photograph, it's going to be dramatically cheaper than the already low unlocked price. A reader sent us the image below, which appears to show an off-contract/prepaid Verizon Moto G in retail packaging, on the shelf at Best Buy and with an anti-theft device. The clincher: it's $99.99. 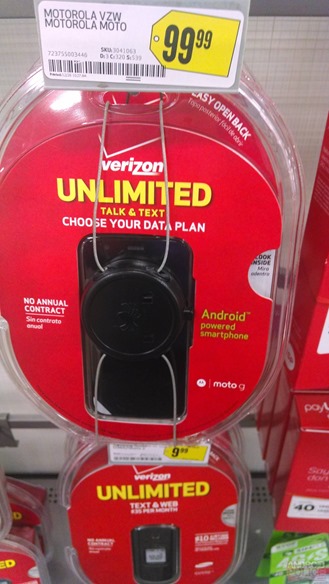 We've got no way to verify this photo and it was sent to us without any other information, but a similar one was dropped by Droid-Life a few hours ago. That photo showed basically the same thing minus the price. If one or more Verizon/Best Buy retail locations are already stocking the Moto G, it might indicate that the company is ready to sell the phone at any moment.

The price is the more interesting aspect here. The Moto G is already being sold in the U.S. via Motorola's website for $179 in an unlocked GSM model. Verizon's model would need to have a radio that supports its CDMA wireless bands, and if Verizon's insistence in other products is any indication, it will probably have a bit of bloatware as well. Even so, $80 off an already-cheap phone is impressive, assuming that it maintains the rest of the GSM Moto G's mid-range specifications. It's worth noting here that the GSM Moto G does not include LTE.

At a hundred bucks, without a contract no less, the Moto G would easily be the best mid-range phone in Verizon's lineup. At the moment Verizon only offers the LG Optimus Exceed ($140), the Optimus Zone ($44), and the Samsung Galaxy Legend ($84) with its prepaid plans, and they're all considerably less powerful than the G and run older versions of Android. This also indicates that Verizon may not offer the Moto G to regular contract customers.

Nothing is written in stone yet, but this seems to be pretty compelling evidence. We'll be on the lookout for any more indications that Verizon's Moto G is incoming.

Update: Droid-Life's post is updated with an internal document indicating that the Verizon Moto G will go on sale on January 9th.