When you combine this with the fact that the 16 GB Nexus 10 has been out of stock on Google Play since October, could this mean a refreshed Nexus 10 is ready for launch? Not really. What this likely means is that the Nexus 10 was not a big enough seller for Staples to place another order once their stock was depleted. There's no shortage of other mobile devices out there that are ready to fill that hole in its warehouses. 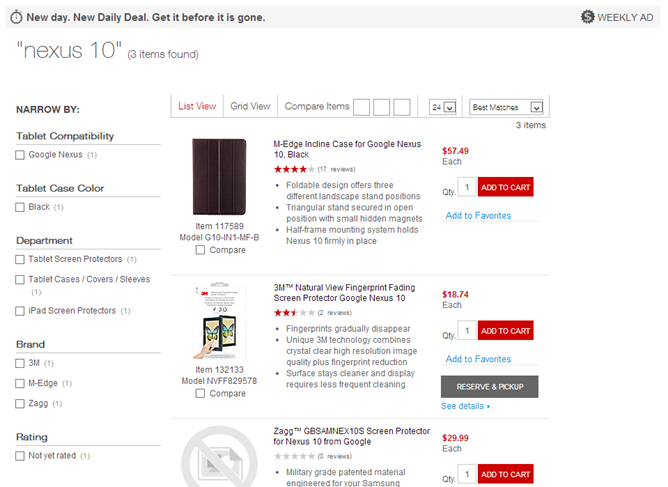 Before you start getting your hopes up that this could mean a new Nexus 10 in the near future, remember this. When you strip away all the baseless rumor, speculation, and click baiting in regards to this story, you're left with one sobering conclusion. While few people would dispute that a refreshed Nexus 10 will arrive at some point in the future, there has not been one single piece of tangible evidence to suggest that it's ready for market:

This is to say nothing of the countless rumors regarding the manufacturer of this mythical device. It started with Samsung being the chosen one, due to a tweet from a WSJ journalist which cited a quote from Sundar Pichai. He later clarified his comments, admitting that Pichai didn't specifically name-drop Samsung. There have also been some ridiculous reports (based on alleged advertisements of extremely dubious authenticity) claiming that LG will, in fact, be the manufacturer.

The most believable rumors, that Asus is the manufacturer, were at least created off of something slightly tangible. They're based mainly on photos of inventory screens from Best Buy and PCWorld, plus a screen photo of unknown origin that was leaked by @evleaks on Twitter. While inventory screens can be a good indicator that a product is coming soon, the first screen was leaked over four months ago, and the most recent one is over 2 months old.

To further add to the enormous dog and pony show that this Nexus 10 story has become, every rumored launch date, be it alongside the Nexus 5, Black Friday, or Cyber Monday, has quietly come and gone.