The Internet Movie Database is one of those invaluable tools that defines the Internet age... at least for movie and TV addicts. Today's app update 4.0 isn't quite as dramatic as some of the previous additions, but it should help you keep on top of the upcoming Academy Award smorgasbord, and might just help you kill some time 'round the holidays too. 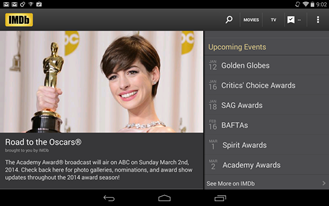 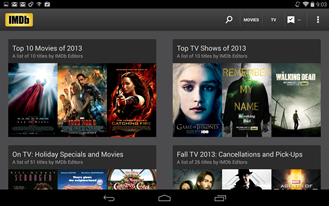 First of all, IMDb has added a selection of lists from the site editors. These aren't the "1000 actresses I'd really like to go on a date with" written by pathetic, bored movie fans... these are "Ten Best Movies of 2013" lists written by professional, bored movie fans. There are also a few more useful lists, including a neat feature on shows that have been cancelled or renewed. Also notable is a list of shows available on Amazon Instant Video... which would be a lot more useful if IMDb's owners would actually release an Amazon Instant Video app already.

According to the description, the app has added even more biographical information to actor and crew pages, though of course some will have more than others. You can also vote on movie and TV trivia, though looking through the app, I can't actually see where you do this. As always, the app is free and includes some relatively tame advertising.