You know what? There are entirely too many versions of the Samsung Galaxy S4. I feel like I've written this same story a half-dozen times, though that's probably because it's essentially the same software update across the Galaxy S4, S III, and Note II. In any case, if you're rocking Samsung's 2013 flagship on budget carrier Cricket, you might see an over the air update prompt today: it's your turn to get Android 4.3. 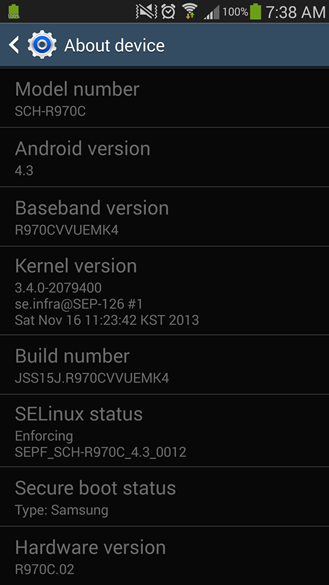 The update has already gone out to most of the applicable Samsung models on the major and minor carriers, and it's the same one here. Software update R970CCRIEMK4 for Cricket's GS4 variant adds all the goodies from the last version of Jelly Bean, plus compatibility with Samsung's exclusive Galaxy Gear smartwatch, a privilege shared only with the GS III, Galaxy Note II, and Note 3. You'll also see support for Samsung's KNOX security system and a few visual updates to the TouchWiz skin. Some of Cricket's proprietary apps (including obligatory and completely unnecessary Navigator) are updated to the newest version, and there are a few bug fixes thrown in for good measure.

Samsung's support page doesn't say how big the update is, but this particular OTA update has been over 500MB for other carriers, so you may want to head for WiFi coverage once you see it downloading. As always, those whose phones are rooted may want to skip the update and wait for verification or an alternate method from the ROM community, assuming that the update will even successfully flash on a rooted Cricket GS4.