Love it or hate it, you can't deny that the Galaxy S4 Zoom is unique. This hybrid offspring from Samsung's mobile and camera divisions (which have since tied the knot) doesn't really compete with the Galaxy S4 as far as specs go, but if you want a solid point-and-shoot camera that makes calls, you probably can't do any better. If you also want that device cheap, Amazon is offering it for just one penny, so long as you also want a new AT&T contract. 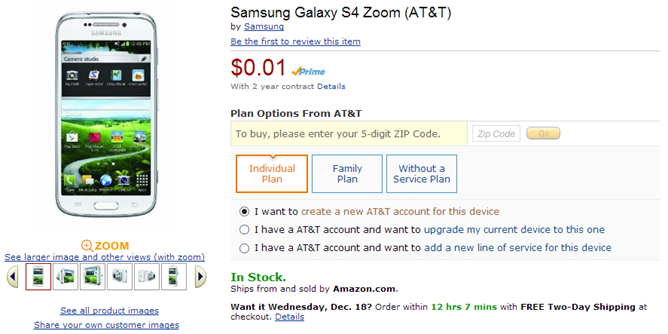 That's a significant saving on AT&T's retail price, currently sitting at $150, contract and all. If you're already an AT&T customer and you want the S4 Zoom on an upgrade, it'll be $49.99 - not bad considering the hardware. As usual, those who don't want to be tied down to a service plan are better off avoiding Amazon's wireless portal: the off-contract price is $599.99, $70 higher than AT&T's online contract-free price.

From a hardware perspective, the S4 Zoom is basically a Galaxy S4 Mini with a stonking great camera module tied to the back. Its 960x540 SAMOLED screen, 1.5Ghz dual-core processor, 1.5GB of RAM, and 8GB of storage aren't going to put it at the top of any spec comparisons. The phone's Android 4.2 + TouchWiz software hasn't been significantly updated since launch. That said, the 16 megapixel rear camera with a 10x optical zoom, physical shutter button, xenon flash, and an F-stop range of 3.1-6.3 is undoubtedly the best that you can get for a "free" contract phone. Amazon is offering it with free two-day shipping for Prime subscribers.