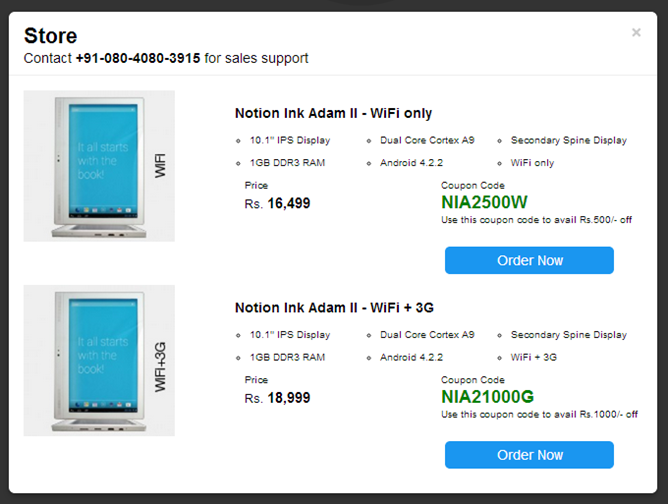 For your cash you get a 10-inch, 1280x800 LCD screen, a 1.5Ghz dual core Cortex A9 processor, 1GB of RAM, a 3.15MP rear camera, a MicroHDMI port, and Android 4.2.2. The storage is a mere 8GB, but it's expandable via MicroSD, and the tablet packs a 6000mAh battery. But it wouldn't be Notion Ink if there wasn't some kind of twist to the hardware, and in the Adam II that comes in the form of a secondary display built into the tablet's side. This "super-twisted nematic" screen is just large enough to display notifications and contextual information in black and white, sort of like a title for a magazine or book.

The software looks like it's considerably closer to AOSP than the original Adam, and screenshots show the Google Play Store. Even so, with decidedly low hardware specs and a chunky build to accommodate the extra screen, the Adam II is unlikely to turn heads. If you want one outside of India, you'll have to wait: we contacted Notion Ink for further release details, and though concrete info wasn't forthcoming, they assured us that they planned to release the Adam II in other regions at some point.