The Google Play Edition update train keeps rolling along. Hot on the heels of yesterday's HTC One GPE update, Galaxy S4 GPE owners are reporting a new OTA update as well. This update was alluded to yesterday, when Samsung released a new set of kernel source and framework files for the device. The firmware version is I9505GUEUCML4, which is Android 4.4.2/KOT49H. This brings it up to date with current Nexus devices. 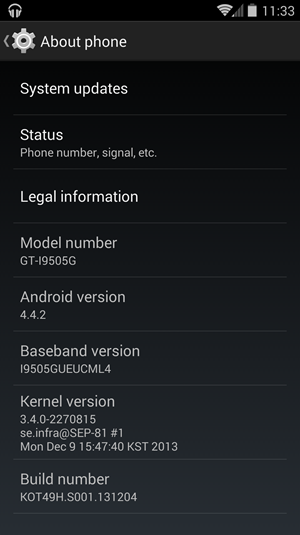 If you want to know what's changed between 4.4 and 4.4.2, check out our comparison. Additionally, a device-specific bug has been fixed. When the first KitKat OTA - 4.4/KRT16S/I9505GUEUCMKG - rolled out, many owners noticed that HSPA/HSPA+ connections were being displayed as "3G" in the signal indicator rather than "H" like it had in the 4.2.2 and 4.3 builds. In this new 4.4.2 update, the signal indicator correctly shows "H" as it should.

Another interesting device-specific anomaly (also introduced in the KRT16S build) that has not been rectified is the seemingly erroneous inclusion of the "Home Screen Tips" widget that was part of stock Gingerbread builds back in the Nexus S days. How that now-irrelevant widget could sneak into a KitKat build is anyone's guess. Let us know in the comments if you receive the OTA update and if you notice any notable changes. The OTA update rolls out in stages, but if you don't want to wait, you can download the OTA directly from Google's servers and flash it manually.