Any Nexus or Google Play Edition device owner has seen it at least once. You get an OTA update to a new version of Android, and you notice that it says "Via Wi-Fi only until" and some arbitrary date. There seems to be a lot of confusion with people regarding what this is and more importantly what it is not. We feel like it's time to shed some light.

A lot of times, when there's a new Android OTA update available, this date becomes annoying to people because it means they can't download their OTA over a mobile network. Even in this day and age, not everyone has ready access to WiFi at the drop of a hat. As annoying as that can be, there's another problem with the date. After an OTA rolls out and weeks pass, the buzz dies down. Randomly, someone will have to wipe their device's data and flash back to stock, or get a new device. They'll get the latest OTA update, notice the "via WiFi-only" date and start to apply a thought process that goes something like this:

While that may seem ludicrous to some, there is definitely logic behind it. Anyone who cruises sites like XDA or RootzWiki with any regularity has almost undoubtedly run into posts like this. That's not what that date is for, though. There is simply no correlation between the date and when Google chooses to release new versions of Android. These WiFi-only dates come and go all the time without there being updates to go along with them. As with most things Google does, there's always a rhyme and reason to why one of its products does what it does, in the way it does it. With that said, searching for Android release timeframes by looking at OTA WiFi-only dates is, frankly, a fool's errand. 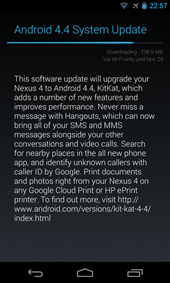 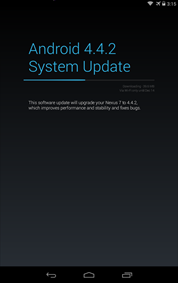 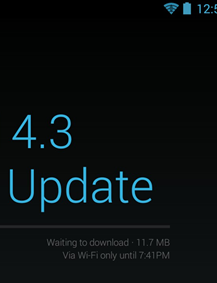 So now that we've explained what the WiFi-only date is not, it's time to venture a guess at what its actual purpose is. The date is mysterious, and there is a lot we don't know. That said, let's start with what we do know.

As for why Google would restrict OTA updates to downloading over WiFi in the first place, that's anyone's guess. Google does not make the full OTA system available via AOSP, so we can't dig through the code to find the answer. If I had to theorize, I'd say that it has everything to do with people not being forced to use their mobile data to download a huge OTA update. Remember, in stock Android, updates download in the background with absolutely no input from the user at all. The only choice you're given is whether or not to install the update, and you are only given that choice after it's downloaded. It seems logical, then, to provide people ample opportunity to connect the device to WiFi before force-downloading an update. When you consider that many people have data plans of 2 GB or less, downloading a 200 MB system update could cost you 10% or more of your bandwidth for the month. That can be a pretty steep price to pay for a download that you had no ability to cancel or defer.

Whether or not my theory stands up to scrutiny, one thing is certain. The WiFi-only date has absolutely nothing to do with when we're going to see a new update for any device. If there's anything that Google has taught us in Android's first 5 years, it's that it will never give an inch when it comes to telling us dates for new versions of Android. That has been an iron-clad policy of Google's from day one and there's absolutely no indication of it changing in the foreseeable future.