As it turns out, that's because the new feature Google stuffed into the app only shows up upon very specific conditions. Luckily, with the help of the latest iOS changelog (how ironic), thanks to our upcoming CES reservations, and by peeking at the APK source, we finally zeroed in on these conditions and can without further ado introduce the main feature of Maps 7.5.

With version 7.5 (and iOS version 2.5), Google introduced Gmail integration into Maps. Right now, this means hotel, restaurant, and flight reservations are presented to you (and only to you for obvious reasons) when you open up the relevant location in Maps. For example, when you pull up an airport, you can see your flight information. Similarly, hotel pages have room reservations and restaurants... you get the idea.

We previously saw a similar level of integration with Google.com searches as part of Search Experiments, a.k.a. Gmail Field Trial, which pulled out info from your email and presented it above search results. While only Google can confirm this when it releases the official blog posts and changelog, my guess is that this feature is limited to U.S., which is customary for new rollouts nowadays (sorry, international folks!).

Update: Google posted this page confirming our find and, just as I thought, it's available only in English in the U.S. 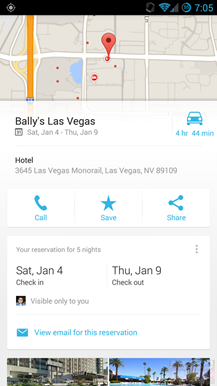 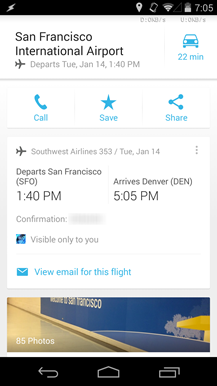 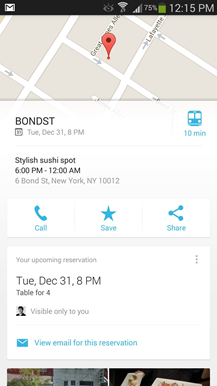 Got a dinner reservation screenshot for us? Spot anything else? The comments await below.

Pick the APK that closer matches your Android version.

Thanks, +Daniel Wiggins, Jonathan A, and Jackn123!